Relief from heat is to come this weekend

Relief from heat is to come this weekend 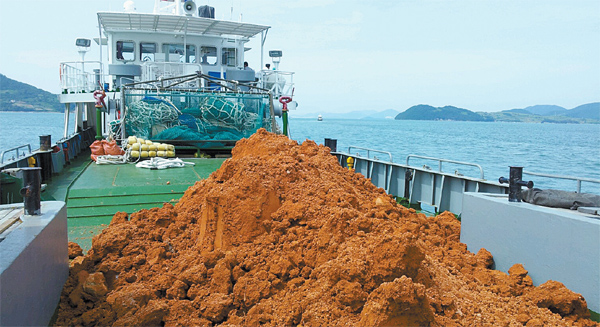 Red clay is loaded onto a vessel yesterday in Yeosu, South Jeolla, to dispel harmful algal bloom in the sea near fish zones. The National Fisheries Research and Development Institute issued its first red-tide alert this year Tuesday for the southern sea waters off South Gyeongsang. [NEWSIS]


Relief from the scorching heat that has gripped the nation for weeks will come over the weekend.

Seoul will see its daily highs go down to around 30 degrees Celsius (86 degrees Fahrenheit) over the weekend. The city has endured highs over 35 degrees Celsius on seven days this month, causing the deaths of 14 mostly elderly people and hundreds of thousands of farm animals, mostly chickens, and driving power usage to dangerous levels.

The state-run weather agency expects the capital’s high to hover around 30 degrees Celsius during the weekend and into next week as a North Pacific high pressure system gradually weakens. Seoul’s high yesterday was 34.3 degrees Celsius, 0.7 degrees Celsius lower than the day before. The fringes of Typhoon Haikui, which flooded Manila and battered eastern China, will also have a cooling effect. The Korea Meteorological Administration forecasts that the typhoon will bring rain to some regions, mainly Jeju Island and southern parts of the country.

The long-awaited rain is also expected to relieve a near-drought across the country. Since July 20, only five millimeters (0.2 inches) of rain have fallen nationwide, 5 percent of the normal average, according to the weather agency. Seoul’s 37 millimeters of rainfall over the period is only 15 percent of the average, while the southern city of Busan has had no rain at all for 20 days as of yesterday.

Three more heat-related casualties were reported Monday, bringing the number of fatalities to 14 for this year. A 55-year-old man was found lying on a street in Busan by a passerby and was transported to a hospital where he later died. His body temperature was 40.5 degrees Celsius when he reached the hospital.

With rising sea-water temperatures, the National Fisheries Research and Development Institute issued its first red-tide alert this year yesterday for the southern waters off Namhae Island in South Gyeongsang.

The institute blamed higher-than-usual water temperatures, between 25 and 27 degrees Celsius, and the spread of cochlodinium, the organism that causes red tides. Red tides can affect sea life and can also be toxic.