China too much to handle for men’s table tennis

China too much to handle for men’s table tennis 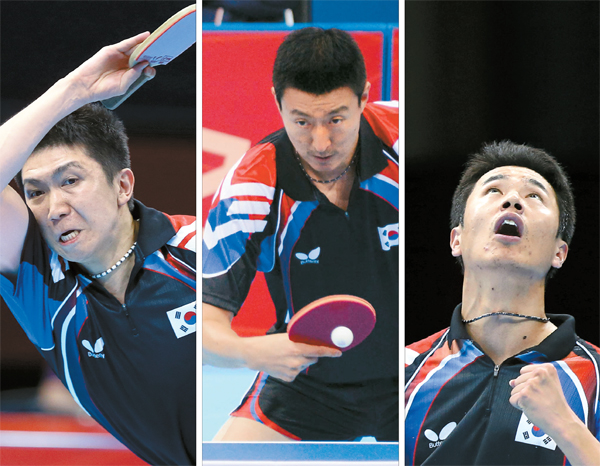 
Korea took the silver medal in the men’s table tennis team competition at the London Olympics after falling to world No. 1 China 3-0. It was a bittersweet ending for Joo Sae-hyuk, Oh Sang-eun and Ryu Seung-min, who fell to the table tennis giants once again in the last match of their Olympic careers.

China’s team is stacked with the world’s best players. Zhang Jike, the singles gold-medal champion in the London Games, is the world’s No. 1 ranking player. World No. 2 Ma Long and No. 4 Wang Hao complete the trio. Korea’s highest-ranking player, Joo, is No. 10 in the world.

The next match between Zhang and Joo turned into a thriller as the defensive Joo and attacking Zhang took part in intense rallies. With his cutting and drives, Joo was able to chase Zhang from the start, but dropped the match 3-1 (11-9, 5-11, 11-6, 11-8) and gave the Chinese a 2-0 lead.

Although the match ended in another easy victory for China, which has now swept all four table tennis gold medals for the second straight Olympics, Korean fans praised what these three veterans, who are all in their 30s, showed throughout the Games.

The team had a bumpy road even before the Olympics. Oh, 35, was without a club for more than a month after a dispute with the KGC table tennis team, while Ryu, 30, has been battling with shoulder and knee injuries. Just before the Games, 32-year-old Joo was diagnosed with Behcet’s disease, a rare inflammatory disorder.

These veterans said they had no regrets as they put their best efforts forward.

“Everyone on the team tried so hard and we really earned this silver,” said Ryu, who won the singles gold in 2004 and the team bronze in the 2008 Beijing Olympics. “I think it’s still meaningful that we reached the finals and challenged China.”

The players also said they hoped future table tennis players will be able to beat China. After these Olympics, both the men’s and women’s teams are expected see an influx of new players as veterans retire.

“I won’t retire right away, but I think it’s hard for me to compete in the next Olympics,” Joo said. “I hope young players to take on the responsibility and compete better than us at the Incheon Asian Games and Rio de Janeiro Olympics in 2016.”

While wrapping up their journey in London, players also didn’t’ forget to give advice to develop Korean table tennis. The silver medal from the men’s team turned out to be the only table tennis medal for Korea in London.

The women’s team lost to Singapore in the bronze-medal match on Tuesday while all players were eliminated in the knockout round in the individual competition.

“China and Germany have professional leagues, but we don’t have that and our player depth is too thin,” Ryu said. “To reach world’s top level, our table tennis also need to be professionalized.”