Last man standing is a surprise for Korea

Last man standing is a surprise for Korea 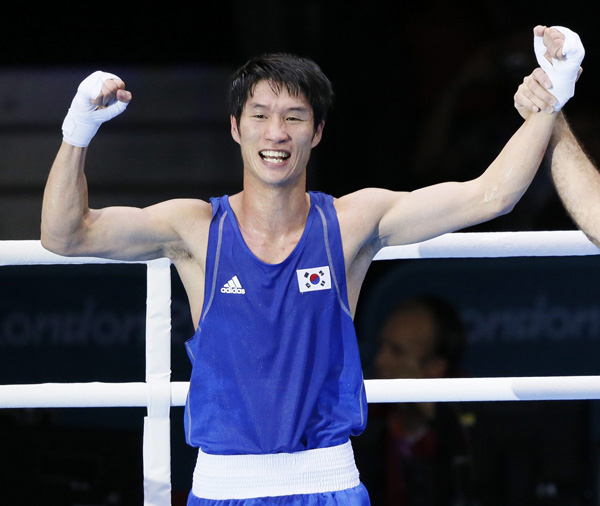 
Few people expected him to be the last man standing from Korea.

Han Soon-chul has emerged from the shadows of world No. 1 Shin Jong-hun at the Olympics, and the boxer has advanced as far as the semifinals in the men’s 60-kilogram lightweight event.

The fight against Evaldas Petrauskas of Lithuania is set for early tomorrow morning Korea Standard Time.

With the pre-Olympic favorite out early in the competition, Korea’s hope for its first gold medal in 24 years in boxing now rests on his shoulders.

Han, 27, said winning the gold would be satisfying for personal reasons too. His wife has supported him and delayed their wedding until he finishes what will be his last Olympic outing.

“I will call out the names of my wife and daughter if I win a gold medal,” he said.

Before entering the London Olympics, Han had never found himself in the spotlight, although he was often near it. Shin, the world No. 1 in the 49-kilogram weight class, received all the media attention. Reporters would come to interview Shin at the National Training Center in Seoul and Han would hit the sandbag close by until the interviews were done.

Shin, 23, was knocked out in the round of 16 by Aleksander Aleksandrov of Bulgaria. Han survived a round of 16 bout against world No. 2 Vazgen Safaryants of Belarus and went on to beat Fazliddin Gaibnazarov of Uzbekistan 16-13 in the quarterfinals.

That has secured him military exemption, a perk given to Korean athletes winning at least a bronze medal at the Olympics. In boxing, every athlete advancing to the semifinals wins at least a bronze.

Han’s father passed away when he was in middle school and his mother had supported him with a small restaurant business in his hometown of Sokcho, Gangwon. Now, he supports his mother and two more family members including his wife, Im Yeon-a, 22, and his 1-year-old daughter, Do-i.

Now with the exemption, he won’t have to spend 21 months fulfilling his military service.

“I have fought for my life. I came to London to win a gold medal,” he said.