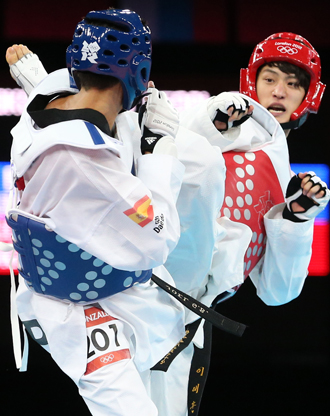 Lee lost to Joel Gonzalez Bonilla of Spain 17-8 in the men’s lightest weight division. This was the first day of taekwondo at this year’s Olympics.

Lee, 20, came up just shy of completing taekwondo’s equivalent of a grand slam. He holds a title from each of the following events: the World Championships, the Asian Games and the Asian Championships. All three titles have come within the past two years.

In the gold medal bout, the Spaniard charged to a quick lead and never trailed. Gonzalez Bonilla entered the final round leading 8-4, and it soon became 14-7 after a successful kick to Lee’s head for three points.

Lee put up four points with kicks in the third round but lost three of them due to penalties.

Gonzalez Bonilla built a 4-0 lead just 37 seconds into the match, thanks to a kick to Lee’s torso and then to his head, the latter worth three points. Lee earned two points with a pair of kicks but still ended the first round trailing 5-2.

The Spaniard picked up his second penalty of the match early in the second round to concede a point to Lee. The South Korean then made it a 5-4 contest with a kick.

But as the clock wound down in the second round, Gonzalez Bonilla had three successful kicks in a row for three points and an 8-4 cushion.

Lee had a bumpy road to the final match Wednesday. He needed decisive, sudden death points to get past both Pen-Ek Karaket of Thailand in the round of 16 and then Tamer Bayoumi of Egypt in the quarters. In the semis, Lee squeezed past Alexey Denisenko of Russia 7-6.

Olympic taekwondo bouts are held over three periods, each two minutes long. If the score is tied after those six minutes, the fighters enter the sudden-death fourth period, where the first to score wins.

Lee won the 2011 world title in the under-63-kilogram class but that division isn’t part of the Olympics. It forced him to drop weight to prepare for the Olympics. And Lee won his first international event in the under-58-kilogram division at the 2012 Asian Championships in Vietnam in May.

For the first time since taekwondo became an Olympic sport in 2000, electronic protective gear has been used in the event. Fighters wear vests and socks with electronic sensors that award points only for strikes of sufficient force.