Striker Park’s play could be key vs. Japan

Striker Park’s play could be key vs. Japan 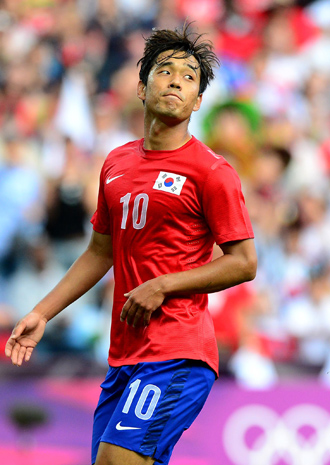 After Park Chu-young joined the Hong Myung-bo Olympic squad as a wild-card striker early last month, the Korean public began to throw its support behind the 27-year-old, who has been embroiled in controversy related to military-dodging allegations.

The Olympic stage has provided Park with the perfect opportunity for redemption. After a disappointing season with Arsenal, during which coach Arsene Wenger kept the Korean on the bench, the Taegeuk Warrior was pitted against Great Britain in the quarterfinals.

But Park has had done little to impact the course of the games thus far, with only one goal in five Olympic matches. Coach Hong kept the striker on the bench for the first 70 minutes of the semifinal match versus Brazil on Wednesday.

“I wanted a player who could play more relentlessly,” coach Hong told reporters after the 3-0 defeat.

The third-place decider against Japan will be Park’s last chance to make a statement. A victory in the match, which will lay his military-dodging allegations to rest because of the country’s medal-exemption policy, may have more of an impact on Park’s career than any other player.

And the team is going to need him to step up. He has the most experience with the Korea-Japan rivalry out of the 18 players on the Olympic squad.

Korea has five members playing in the J-League and coach Hong is planning to capitalize on their experience. Kim Young-gwon had played for Omiya Ardija until recently while Kim Bo-kyung started for Cerezo Osaka before signing with Cardiff City.

“”I think we know Japanese football well. We will put up a good finale and leave no regrets,” Hong said.

But no player knows Japan as well as Park, dubbed by some as the “Japan Killer.”

Park has played in six matches against the rival nation with either the Olympic team or the U-20 national team and has never lost. He scored five goals in those games, contributing to Korea’s four victories and two draws.

At the AFC Youth Championship in 2004, Park scored the equalizer in the semifinal against Japan, contributing to Korea’s title after a 3-1 penalty shootout win.

In the eight-country youth invitational in Qatar in 2005, Park scored both goals in a 2-0 win against Japan in the final.

But it may not be easy this time around. Japan has improved recently. In an international friendly in Sapporo in August of last year, during which key members of the Hong squad competed including captain Koo Ja-cheol of FC Augsburg, Ki Sung-yueng of Celtic and Kim Bo-kyung, Japan routed Korea 3-0.

Japan’s FIFA ranking stood at 22 this month, seven notches ahead of Korea.

The Takashi Sekizuka squad failed to realize its goal of bringing Japan’s first Olympic football gold medal, and it will be eager to match the country’s bronze medal performance at the 1968 Mexico City Olympics.

But the Korea-Japan rivalry has often been about grit and spirit, not just the skill of players, and that may be the biggest contribution Park will be able to make for his team during the Saturday’s game. And it may be his last chance to show what he’s got.