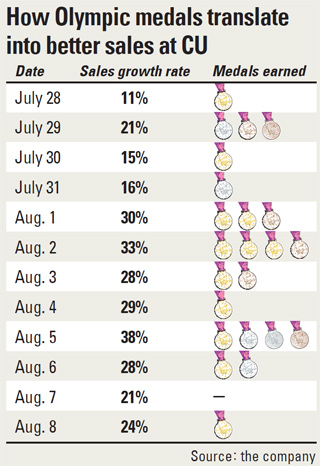 As Korea remains on track to beat its record haul of 13 gold medals at a single Summer Games in London, sales at convenience stores here have been booming as people of all ages sit through the night to catch the action live.

Sales surged from the fifth day of action at the Games, which fell on Wednesday, as the public became infatuated with its athletes’ success in London and the golds kept pouring in.

Korea recorded its best-ever gold haul at the Beijing Games four years ago but only targeted 10 medals in the British capital - a goal that already looked like a pipe dream after a dismal opening weekend.

However, as the country’s Olympians pulled out all the stops in a range of sports from judo to gymnastics, and the men’s football team blasted its way to the semifinals, interest spiked and sales of snacks and drinks at convenience stores have reaped some of the rewards.

In the first few days of the Games, sales were up about 10 percent. This changed on July 29, when national hero Park Tae-hwan won the silver medal in the 400-meter freestyle swimming event, and CU posted sales growth of 21 percent.

According to CU’s analysis, sales grew by between 10 percent and 30 percent on-year during the hours the Olympics were broadcast, depending on the national team’s success rate.

“When Kim Jang-mi took the gold medal in the thrilling women’s 25-meter pistol shooting [on Aug. 1], sales surged in excess of 30 percent,” said an employee at BGF Retail, which operates CU.

The following day saw gold medals flood in from archery, judo and fencing, and sales growth at CU jumped 33 percent. Sales expanded by a record 38 percent on Sunday, when the soccer team advanced to the semifinals for the first time in the country’s 64-year Olympic history by defeating Britain in a tense penalty shoot-out.

Over the first 12 days of the London Games, beer sales at CU surged the most, or 45 percent on average, trailed by snacks such as frozen dumplings and beef jerky, which jumped 42 and 35 percent, respectively.

Demand for ice cream and cold beverages has also been growing since last week, when the unusual heat wave caused a wave of so-called “tropical nights” across the country. Ice cream sales rose 44 percent, and cool drinks went up 38 percent over the same period at CU.