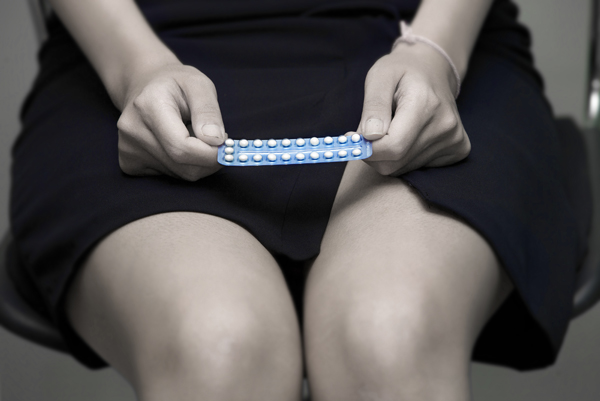 Suh went into a pharmacy in central Seoul on her way to work late last month and paid 120,000 won ($106) for 12 boxes of birth control pills, enough for a year.

The 28-year-old wanted to avoid visiting a gynecologist for prescriptions for the pills, which could be required starting next year.

“I’m not married, so I would definitely feel uncomfortable going to see a gynecologist every month to get birth control pills,” said Suh. “Luckily the pills have a long shelf life.”

Currently, birth control pills are over-the-counter (OTC) drugs that don’t require a doctor’s prescription. But in early June, the Korea Food and Drug Administration (KFDA) announced it was considering making non-emergency oral contraceptive pills available only by prescription. In addition, morning-after, or emergency contraceptive, pills that are currently sold by prescription only would be available over the counter, though a prescription still would be required for minors. The changes would take effect Jan. 1.

The proposed change is part of a yearlong reclassification of all medication sold in Korea. A total of 39,254 types of medicine were inspected and 212 would go from prescription to OTC, while 273 would become available only by prescription, including birth control pills.

The KFDA said in a statement that long-term exposure to oral contraceptives can cause side effects, such as thrombosis, and affect hormone levels.

“In order to prevent pregnancy, women are advised to take the pills for 21 days a month then take a seven-day break. This pattern goes on forever. It affects the hormonal activities of the body. We need a careful approach to the issue,” said Kim Sung-ho, a KFDA official. The official added that birth control pills are prescription medicine in several advanced nations.

“On the other hand, emergency contraceptives are only taken after unprotected intercourse; there’s relatively less possibility of side effects.” 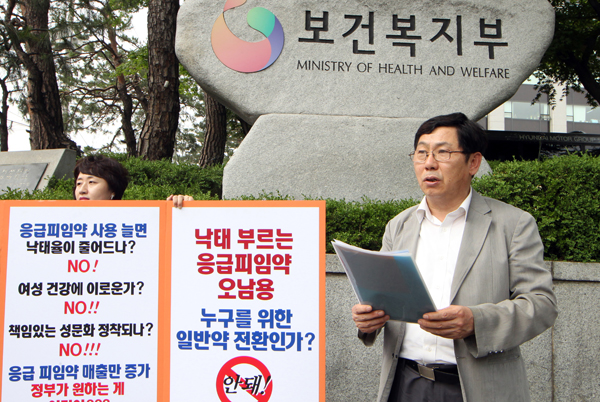 Obstetricians and gynecologists gathered at the Ministry of Health and Welfare in June to protest the government’s plan to make morning-after pills available over the counter. [JoongAng Ilbo]

Nonetheless, the proposed changes have sparked fierce discussions. Korean Womenlink, a women’s rights group, argues that “birth control pills are essential for women in preventing unwanted pregnancies and demanding that they visit a hospital every month is a serious restriction on the right of women to choose.” Meanwhile, the group welcomes the reclassification of morning-after pills to an OTC drug.

“Women should be given the power to choose to get pregnant or give birth by allowing them to have easy access to oral contraceptive pills - both non-emergency and emergency contraceptives,” says Kim In-sook, head of Korean Womenlink.

Aside from the “women’s right to choose” argument, one of the reasons Korean women get upset over the issue is that unmarried women rarely visit a gynecologist.

Suh doesn’t like visiting gynecology clinics because of the “disapproving stares” she receives from patients in the waiting area who are “married and guiltless.”

“I think they have magic eyes to tell who is married and who is not,” said Suh. “Even though I’m not there to get a morning-after pill prescription or discuss an abortion, I feel like they are judging me silently with their stares. Korean women are socially pressured to remain sexually naive [before marriage], you know.”

On July 20, dozens of young men and women gathered in Hongdae, a popular clubbing district in western Seoul, and held a candlelight vigil to demand that the KFDA scrap its proposal to make birth control pills prescription-only.

“I’m curious to know if the government took opinions from us women before recategorizing the pill as we are the users,” said a 22-year-old surnamed Choi, who is a member of Korean Womenlink.

“Such a rule is of no use as women’s opinions were neglected in the process.”

Younger users of birth control pills argue it would be “a nightmare” to visit a gynecologist every time they need the pills they take not only to prevent unwanted pregnancies, but to relieve menstrual pain, control irregular menstrual cycles and adjust menstrual days.

“I’ve been taking birth control pills because I have an irregular menstrual cycle. A gynecologist strongly recommended that I take them, so I’ve been purchasing one box per month at a pharmacy and it already costs 10,000 won per box,” says Han Min-kyung, 18, a high school student in Seoul. “It would not only be a hassle to visit a gynecologist every month to get a prescription, it would cost more.”

The Citizens’ Coalition for Economic Justice is on the same wavelength as women’s rights groups.

The coalition issued statements concerning the reclassification of birth control pills, arguing that the pills have been “OTC drugs for 40 years and there weren’t any concrete reports of side effects.” The coalition says it is “inappropriate” for the KFDA to reclassify the pill because of “possible side effects.” 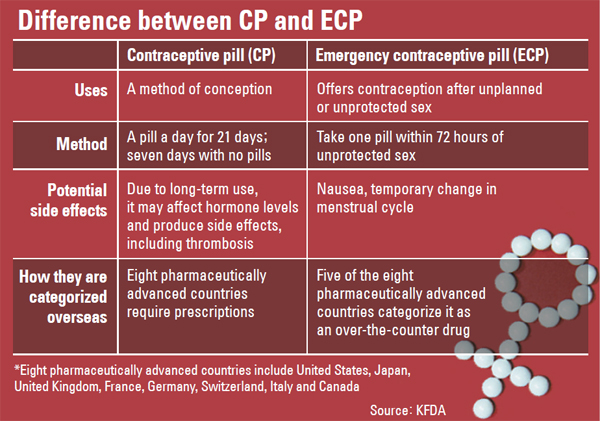 According to the statement, the coalition insists that “emergency contraceptives be reclassified as OTC, while birth control pills remain OTC so that women can freely purchase them.”

The group said it will file a constitutional appeal if the government implements the proposed change.

Meanwhile, some religious groups oppose the KFDA’s decision to reclassify morning-after pills as OTC. The Catholic church in Cheongju, North Chungcheong, held a protest in front of KFDA headquarters in North Chungcheong in early June, warning that “emergency contraceptives hurt the morals of people and give wrong lessons on the value of life, especially to teenagers.”

Even before the KFDA announced the proposed changes, the bioethics committee of the Catholic Bishops’ Conference of Korea (CBCK) issued a statement in May that the morning-after pill “is a kind of contraceptive infringing upon human life.” The church regards contraception as a form of abortion.

Bishop Gabriel Chang Bong-hun, president of the CBCK, said, “Blessed Teresa of Calcutta said abortion is the most severe violence against the peace of the world ... Just as we can’t tolerate visible school violence, we can’t tolerate the invisible violence of abortion and the morning-after pill.”

Seventy Catholic groups in Seoul issued a joint statement last month that said, “Assertions that easy access to morning-after pills can decrease unwanted pregnancy and illegal abortion are wrong, because taking the pills means that they don’t want to give birth, which will lead to illegal abortion if the pills don’t work.”

Aside from Catholic churches, medical groups in the country are not in agreement over the proposed changes.

The Korean Association of Obstetricians and Gynecologists said morning-after pills could encourage “irresponsible sex, especially among teenagers,” and argued the pills must be taken under a physician’s supervision.

On the other hand, the Korean Pharmaceutical Association (KPA) welcomed the deregulation, saying it would decrease the number of illegal abortions.

Emergency contraceptive pills should be taken as soon as possible after intercourse but can be effective for up to 72 hours. “Finding and visiting a doctor in that limited time is very difficult,” the KPA said in a statement.

However, the Korean Association of Obstetricians and Gynecologists contends that easy access to morning-after pills would not decrease the number of illegal abortions.

According to the group, countries like the United States, United Kingdom, Sweden and Norway reclassified morning-after pills to OTC in early 2000 and sales skyrocketed over the following six to eight years. “Contrary to expectations, none of the countries saw a decrease in the abortion rate,” says the association.

“In fact, there’s a report that Sweden saw a 17 percent increase in abortions along with an increase in sexually transmitted diseases because people neglected using other means of contraceptives due to easy access of emergency contraceptive pills.”

The Korean Society of Obstetrics and Gynecology also warned of the side effects of emergency contraceptives, issuing a statement prior to the KFDA announcement in early June.

“Emergency pills shift the hormonal action of the body to an extreme level .?.?. The hormone contained in the drug is 10 to 15 times stronger than regular pills,” said Chung Ho-jin of the society.

Chung also added that the “failure rate of the emergency contraceptives is more than 15 percent, which shows the drug is not a cure-all for irresponsible sex.”

The portal Web site Dooit Survey revealed that about half of netizens surveyed oppose birth control pills becoming prescription-only. It surveyed 1,698 adults in Korea from June 19 to 22 and found 49.5 percent of the respondents are against the proposed change as opposed to the 32.9 percent in favor.

Opponents of OTC status said 39.7 percent were concerned about misuse like abuse and overuse, and 20.3 percent were wary of a “disorderly sex culture.”

Although the KFDA initially said it would make its final decision last month, it postponed the announcement to later this month.

“We said that the announcement may be released as early as end of July, however, we are still in the process of screening. The results may be out by the end of this month,” said Ko Min-jeong, an official of the KFDA.