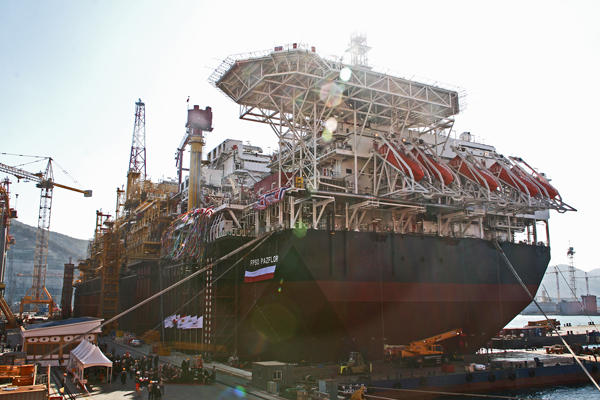 Pazflor, a floating, production, storage and offloading unit, is ready to be delivered to Angola at DSME’s dockyard in Geoje, South Gyeongsang. Provided by DSME


The fate of the nation’s top three shipbuilders will likely be decided by their success in hunting down orders for offshore facilities, an important new revenue stream, as they deal with a worldwide industry recession exacerbated by the euro zone debt crisis.

The three companies are chasing a number of offshore facility orders worth around 20 trillion won ($18 billion) for the second half of the year.

Offshore facilities are the floating?platforms that allow resource developers to explore gas and oil in deep waters. They are a new cash cow for shipbuilders, which have been hit by declining profits due to falling demand for traditional vessels.

DSME is ready to grab the majority of the orders in the coming months. Korea’s third-biggest shipmaker by order backlogs won lucrative contracts by aggregate in this segment in the first six months of 2012, edging ahead of world No. 1 player HHI.

The company won orders worth $3.3 billion in total as of June, including a $2 billion floating, production, storage and offloading (FPSO) unit, two $1.1 billion submarine drill ships, and a $200 million fixed platform. DSME has been conducting research on offshore facilities since the 1980s.

“As DSME has long been dedicated to the offshore facility area, this year could be a good chance for it to boost its capabilities to snatch orders and build more offshore facilities,” said Lee Cheol-sang, the company’s executive vice president.

New CEO Ko Jae-ho is credited with setting the company on a smooth course this year. Having formerly spent 30 years with Daewoo Group, Ko is specialized in overseas sales of ships as he spent most of his career abroad in countries like Britain and Norway.

“Because the CEO has close ties with many owners of shipping companies in Europe and Africa, it seems like it will be easier for DSME to win upcoming offshore projects,” said an industry insider.

DSME has strong ties with African shippers. According to industry officials, the shipbuilder is all but guaranteed to soon secure a $2 billion contract for an offshore platform over the Mafumeira oil field off the coast of Angola.

HHI has kept a vice-like grip on shipbuilding orders but seems to be running out of steam as it won fewer orders than planned this year.

“Although we failed to meet our first-half target, we expect to perform better through the rest of the year,” said Kim Kwang-kug, a manager at the company.


The company set its target orders at $24 billion for this year, but has managed about $5 billion so far.

Now it is looking forward to signing a contract with French gas and oil developer Total to build a $2.5 billion FPSO unit in Nigeria. The company is competing with SHI in the bid, but it is confident it will ultimately get the nod.

HHI confirmed it is on track to sign a deal with Norway-based Statoil to build a gas production platform next month. 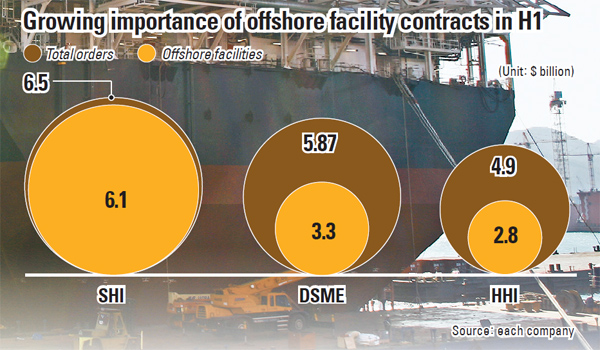 The Korean shipbuilding industry is heaving a collective sigh of relief as several more offshore facility orders are expected to be placed by next year.

Zadco, a multinational group based in the United Arab Emirates, is looking for a shipbuilder to construct both offshore and onshore facilities. HHI and DSME have formed two separate consortiums with foreign companies to snatch the order. The market favors HHI, however, due to its experience in the Middle East.

Demand for offshore facilities is on the rise as global oil developers accelerate their efforts to secure oil and other resources under the sea as international oil prices have been rising.

“Some of the planned orders could be delayed, but it would be wise for shipbuilders to keep betting on the offshore facility business, especially if oil prices stay between $80 and $100 per barrel,” said Park Moo-hyun at Etrade Korea.