Lotte out to lure Chinese with tourist boutique

Lotte out to lure Chinese with tourist boutique 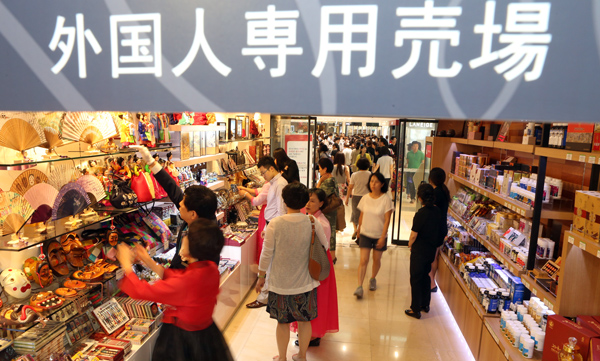 Chinese shoppers sift through traditional Korean merchandise and products tailored to their tastes yesterday at an exclusive boutique for tourists that opened last week at Lotte Department Store in Sogong-dong, central Seoul. [YONHAP]


Eschewing the perfume and jewelry counters on the first floor, a group of Chinese tourists were sifting through Korean ginseng and shopping bags on an upper level of Lotte Department Store in central Seoul recently after the retailer opened the exclusive tourist-only boutique last week.

Hordes of visitors from the Chinese mainland fly to Korea to snap up local cosmetics and other products that are difficult to find back home, as well as snap-up duty free designer goods, and Lotte has begun targeting them more aggressively to help beat the financial downturn as their numbers grow.

The new boutique on the ninth floor, the first in the country, prominently displays products tailored to Chinese tastes, but also adds a strong Korean flavor by having sales clerks greet them in hanbok, or traditional Korean dress.

This comes in stark contrast to the situation only a few years ago, when the retailer’s main target in terms of foreign customers were the Japanese. Lotte founder Shin Kyuk-ho initially built his empire in Japan.

“This has been happening a lot in recent months,” said a sales clerk at the boutique.

“We are expecting more Chinese tourists with the launch of this store.”

“Chinese tourists spend about 1 million won ($880) per person on average, or double what Japanese shoppers spend,” said another Lotte employee.

According to Lotte, purchases by Chinese jumped 170 percent in the first half.

The figures are calculated based on how much they spend using credit cards issued by Bank of China, the main means of payment for tourists from the country. 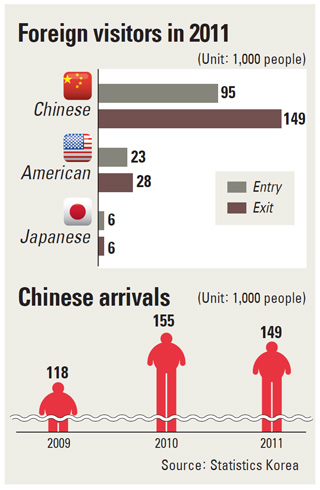 “We are planning to increase our range of mobile phone accessories and other goods with traditional Korean patterns to 500 items. We will also showcase more than 200 products including health foods such as red ginseng and hangwa, or Korean cookies,” said the sales clerk.

Lotte said it has recruited staff fluent in Mandarin to help with sales.

“Sales remained sluggish even after we held our longest-ever sale to attract Korean customers,” said a sales manager at Lotte Department Store, explaining the refocusing of attention on moneyed Chinese.

Lotte’s duty-free shops have posted record numbers on the back of robust sales to Chinese and now the group seeks to replicate some of this success in other parts of its department stores.

Sales at Lotte Duty Free within the Sogong store made up one-third of its total sales in the first half.

Chinese shoppers began outnumbering Japanese at the store for the first time this year, Lotte said.