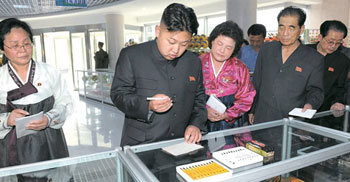 Pyongyang reportedly laid out new economic measures that change its state-supervised distribution system and then gave official explanations about the changes to the public in an apparent shift toward a market economy.

RFA said that North Korea “is going to allow people to run factories or companies autonomously and set prices of their products by themselves,” citing multiple sources.

The sources also said that the new system “distributes materials only for some people engaged in special sectors such as government, military, education or medicine, which will actually abolish the public distribution system.”

“Granting autonomy to collective farms or factories would make a huge impact on expanding the role of the market in the regime,” Im Eul-chul, a professor at the Institute for Far Eastern Studies, told the JoongAng Ilbo. “It means they will officially approve some economic actions that had been regarded as illegal.”

Starting from this fall, the regime will take only 70 percent of the harvest and allow farmers to own the remaining 30 percent, the sources told RFA.

So far, people were able to possess surpluses that exceed a certain level designated by the regime, but that standard was useless because of the extremely low output of North Korean agriculture.

The sources said that the new economic policy, dubbed “June 28 economic measures,” was set by the directive of new leader Kim Jong-un, which reportedly read, “to launch an economic management system in our own style.”

South Korea’s National Intelligence Service said at a National Assembly meeting on July 27 that Pyongyang is currently running a special department for new economic management that raises wages of workers and some autonomous management of companies is allowed.

“I was told that Pyongyang will test the new system for the upcoming three months,” Jo Bong-hyeon, a researcher at IBK Industrial Bank, told the JoongAng Ilbo.

“They will adapt the system steadily, reflecting public opinion and educating people about it.”

It’s not the first time that the regime attempted economic reform. North Korea launched economic reform on July 1, 2002, with similar ideas - a pay raise and more independent farming. But the plan was withdrawn in 2005 when the regime started to crack down on the burgeoning capitalism in the country.

In 2009, then-heir Kim Jong-un carried out currency reform, but it destabilized the economy and caused extreme inflation.

A source frequently communicating with North Korean people also told the Korea JoongAng Daily that it’s not a new thing that the impoverished regime is backpedaling on socialism.

“The regime almost stopped food rationing a few years ago because of the chronic food shortage,” the source said. “So the public distribution system has actually stopped since then.”