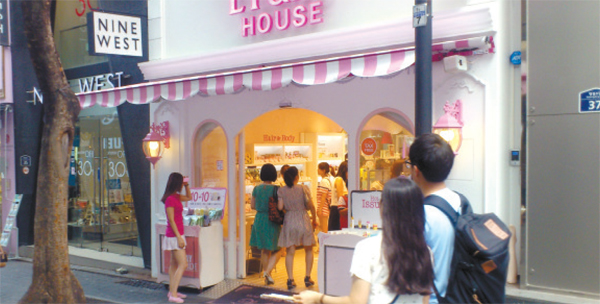 A saleswoman at the Myeong-dong branch of cosmetics store Etude House stands by the automatic door to keep it from closing on July 25. At the same time, an air-conditioner blasts air at 25.3 degrees Celsius (77 degrees Fahrenheit) inside the store. By Lee Dong-hoon


As the sun glared down on Myeong-dong, the popular shopping district in central Seoul, on July 26, visitors sought refuge in air-conditioned stores. But despite blasting AC units at full capacity, businesses kept their doors wide open. A saleswoman at an Etude House cosmetics store prevented the automatic door from shutting as she shouted out discounts to potential customers.

After the nationwide blackout in September of last year and the Korea Meteorological Administration’s first-ever heat wave warning in Seoul, the government has attempted to step up its enforcement of energy conservation policies. Yet the effectiveness and ramifications of these regulations have come under heavy scrutiny, with many business owners fretting over the stringent guidelines.

The Ministry of Knowledge Economy began enforcing a regulation on June 1 that prohibits businesses from keeping their doors open for more than five minutes while running an air-conditioner. It also stipulates that the indoor temperatures of buildings must be no lower than 26 degrees Celsius (79 degrees Fahrenheit). First-time offenders are issued verbal warnings, but fines can range from 500,000 won ($442) to 3 million won.

Yet some businesses are willing to risk penalties in order to keep their doors open. Paul and Louis, a men’s clothing shop in Myeong-dong, has been contacted by control officers five times for violating energy conservation regulations. But the owner still insists on keeping the doors open to promote the store.

“It is an inevitable choice in order to survive in the cut-throat competition of Myeong-dong,” an employee said. “The control officers tell us to shut the door, but the manager tells us to keep it open as it is more convenient for the customers to come and go.”

An employee working at Barbara, a women’s shoe store, said the regulations do hurt business. “Closing the doors has a direct effect on our income,” she said. “It is a painstaking decision to make.”

“If we close the door, people think we have closed for the day,” a Pancoat employee added.

Some businesses that do comply with the regulations said a lack of enforcement puts them at a disadvantage. At Cplus, a women’s clothing shop, electric fans replace air-conditioners. “Customers avoid our shop because it is hot in here,” an employee said. The temperature in the shop was 29 degrees Celsius at the time of the interview. Clothing shop BSX has “Energy Saving” signs attached to its doors. However when asked about the law, the employee disapproved of its effectiveness.

The Seoul Climate and Environment Administration said that while business owners were reluctant at first, the policies are having a positive effect.

“At first, the business owners were up in arms about it,” an official from the administration’s headquarters said. “But the participation rate is gradually improving.”

“Our objective is to conserve energy and thwart electricity shortages during the summer,” said an official from the Jung District Office, which is responsible for enforcing the regulation in Myeong-dong. “Recurrence of a nationwide blackout is still deemed possible this year. We believe that strengthening control over prosperous commercial streets during the peak time between 1 and 6 p.m. will be an effective countermeasure.”

Inspectors from the Jung District Office found 33 violations and have penalized three violators so far.

This article was written with the assistance of a staff reporter during the summer internship program.