Korea hopes for bronze in volleyball

Korea hopes for bronze in volleyball 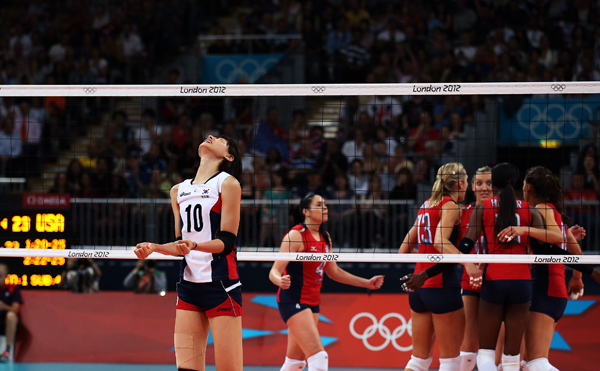 Kim Yeon-koung, left, grimaces while players of Team USA celebrate after their victory in the women’s semifinal volleyball match at Earls Court during the London 2012 Olympic Games, Thursday. [YONHAP]


Korea’s hopes for a first-ever Olympic gold medal in women’s volleyball were dashed with a 3-0 loss to the U.S. in the semifinals Thursday night Korea Standard Time, and it will make a bid for its first bronze medal in 36 years against archrival Japan tonight. 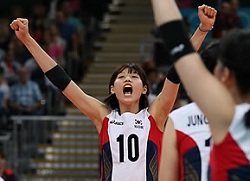 Japan also lost to Brazil 3-0 in the semifinals and will play Korea at 7:30 p.m. tonight in the bronze-medal match.

It is another Korea-Japan battle for a bronze after the men’s football match that was scheduled to start at 3:45 a.m. this morning.

“We still have one match and we want to do well,” Kim told reporters after the semifinals. “We are here to get a medal. Otherwise everything we worked for to get here will be worthless.”

The Korean team that last won a bronze medal at the 1976 Montreal Olympics beat Italy 3-1 in the quarterfinal on Wednesday. Korea’s women’s handball team also failed to advance to the final, losing to Norway 31-25 in the semifinals early yesterday morning KST. It will vie for a bronze medal in the third-place decider early tomorrow morning.

Son Yeon-jae, Korea’s brightest hope in rhythmic gymnastics raised the prospect of reaching the finals after finishing fourth out of 24 athletes in the first day of the two-day qualification in women’s all-around event Thursday night.

She scored 55.900 points combined in hoop and ball, where Russia’s Daria Dmitrieva led at 57.800. The second-day qualification is composed of club and ribbon competitions.

The 10-member final is slated for today. No Korean gymnasts have advanced to the Olympic finals in rhythmic gymnastics.