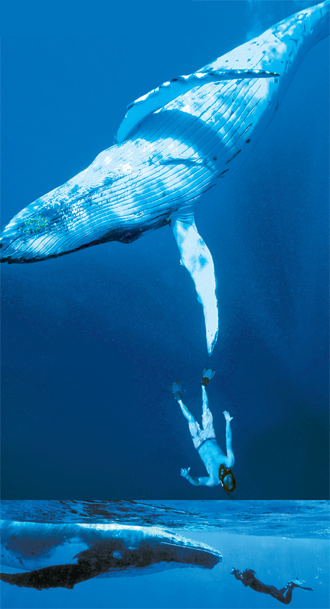 A massive humpback whale weighing approximately 36,000 kilograms (79,400 pounds) and stretching some 14 meters (46 feet) rolls out its right pectoral fin toward a scuba diver, who descends deep into the indigo blue water. It is as though the giant mammal is reaching out to rescue the diver with its long fin, which is used to communicate with other whales.

The stunning photograph described above bears the essence of what Jang Nam-won seeks to deliver through his photo exhibit on human interactions with marine mammals. “Whale: The Moving Island” at the Lotte Gallery in central Seoul will display rare images of humpback whales living off Vavau Island of the Kingdom of Tonga, some 1,900 kilometers northeast of New Zealand, where the marine photographer spent five years.

The 62-year-old dedicated 30 years to capturing marine life through his lens. He sat down for an interview with the JoongAng Ilbo to discuss his experiences and the types of work to be expected at his most recent photo exhibit.

Q. Could you first explain how you found yourself in this field of work? Were you always passionate about underwater photography?

A. I discovered my interest in marine photography when I began working as a photographer at the JoongAng Ilbo back in 1979. They had underwater camera equipment. I was not able to use the equipment because of my heavy workload, but then I picked up underwater photography skills from senior colleagues by following their lead.

I learned skin diving [diving without the use of portable air supply] to better snap shots in the ocean. I later found myself mesmerized by the water after my first diving experience off the port city of Sokcho on the east coast.

When did you begin to see underwater photography as a profession?

Three years after I first learned how to capture photos underwater, one of my pieces, which shows soft corals on Jeju Island, was first published in the newspaper. That’s the moment that I decided I had to shoot better scenes. After I quit the job as a newspaper photographer, I did nothing but snap underwater photographs, looking for places where I could spot whales.

Why have you mostly taken photos of whales?

Nobody truly understands how amazing it is to interact with the massive species. Whales are really gentle and docile. They make room for humans by moving aside when encountering them. They even pull aside their fins in order to avert the divers. If a photographer dives deep into the water, the whales stretch out their fins.

When I become friends with a whale, it mimicks my every move. If I turn around, the mammal does the same. When I open my arms wide, the whale tries to mimic the gesture by spreading its fins wide. It’s an amazing experience.

Younger whales are especially out of control. They tend to come back and forth to inspect people. Adult whales try to keep them away from divers, but the young ones often swim past people underwater. 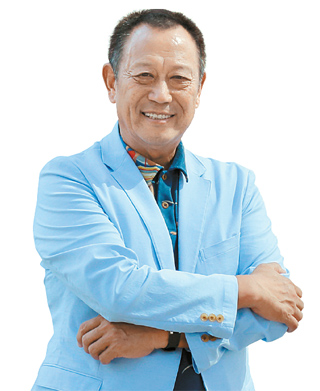 Do you have any special skills when it comes to interacting with whales?

First, I approach the tail of a humpback whale. When I keep swimming around it inconspicuously, the whale usually sprays water to keep its distance. If I were to rush up to the whale, it would violently shake its fin, which could kill me. I always go to the tail for a moment. After swimming back and forth several times, the whale starts to stay within reach, which means it considers me safe.

How difficult is it to take photos underwater?

I think I am cut out for the job because I love the ocean. I even signed up for the Navy. Still, it was tough at first. The sea was dark and cold. I couldn’t shoot pictures as I wanted and failed to adjust to the conditions. I headed to Gangwon every week to practice underwater photography. I took pictures there again and again.

When you try to capture photos of whales, you are not supposed to wear oxygen tanks. Whales are sensitive to sound and they are likely to react to the sound of the tanks. So I learned how to hold my breath for a long time and would dive at depths of 10 to 20 meters, and then return to the surface.

Have you had any near-death experiences while taking photos?

Yes, I have. I have had a lot. But they were not caused by whales but by manta rays. I went to [the Pacific island of] Palau to photograph devilfish. I dove down to the sea floor where the tidal current was strong. A manta ray approached me after 35 minutes and wrapped around me tightly. I tried to escape, but I failed. It was squeezing me so hard but suddenly it let me go. I was thinking, “What did I do wrong?”

I also suffered from facial paralysis while I dived 66 meters below sea level at Chuuk in the central Pacific. Luckily, I recovered within 25 days.

Haven’t you grown tired of the sea?

No, I still love the sea. All the hardships melt away when I see those giant whales. If I take wonderful pictures, I am eager to return to the water. When I get not-so-great results, I jump into the ocean again to improve.

The exhibition runs from Aug. 8 to 26 at the Lotte Gallery, which is located on the 12th and 14th floors of the Lotte Department Store in central Seoul. Admission is free. Go to Myungdong Station, line No.4, exit 6. For more information, call (02) 726-4456.