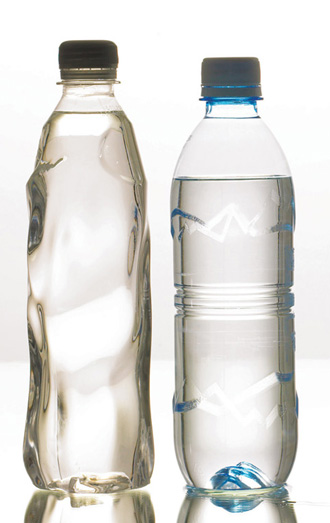 With huge blue-green algal blooms spreading from the northern Bukhan River to the Han in Seoul, as well as appearing in other rivers across the country, bottled water sales have?jumped nationwide as fears of contaminated tap water seize the public imagination. 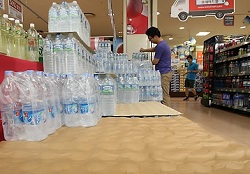 Now concern is mounting among major retailers such as Homeplus that such hoarding by consumers could cause a temporary shortage of bottled water.

Popular online shopping mall 11st said yesterday that its on-year sales leapt 60 percent from Aug. 3 to Thursday with daily sales rising past 50 million won ($44,250) on the first day, marking a new high for 2012.

Bottled water as a proportion of all processed food and beverage sales also doubled on-month, it said, accounting for 12 percent in August compared to 6 percent for the first 10 days of July.

“The sales increase is widely seen as stemming from the algae phenomenon across the country caused by a long heat wave and drought,” said an employee at 11st. “People who used to drink from water purifiers, or who relied on boiled water, are now switching over to bottled water brands, as some have seen greenish water ooze from the taps.”

From Aug. 3 to Thursday, sales of two-liter bottles of mineral water rose by 10 percentage points to account for 80 percent of all bottled water sales, indicating how household use is driving demand.

11st said it will put five bottled-water brands on sale from Monday to Sunday to tap the spiking market demand.

Other major discount chain stores such as Homeplus, E-Mart and Lotte Mart have also benefited from the water scare by seeing sales take off.

E-Mart saw sales surge 64 percent from Aug. 2 to Tuesday, compared to the same period in 2011. This was much higher than the boost it got from the recent heat wave, which caused on-year sales to climb 37.1 percent from July 19 to Aug. 8.

Homeplus, which ranks as a super supermarket, saw sales rise by around 40 to 50 percent on each of the three days at the start of this week. News of the algal blooms around Seoul broke on Tuesday.

Although rain is forecasted for this weekend, which could alleviate the algae festering in the nation’s waterways, consumer anxiety is likely to keep propping up bottled water sales, retailers projected.