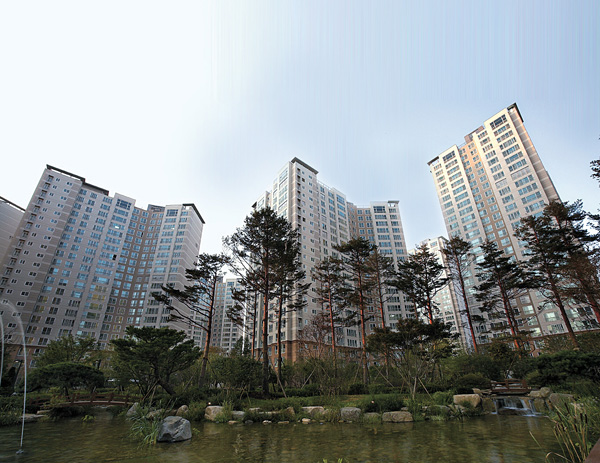 The Korea Housing Finance Corporation is issuing provisional seizures of residents’ monthly salaries as more homeowners are choosing not to repay their mortgages on newly purchased houses, many in protest against falling housing prices.

Disgruntled at seeing the value of their property plunge before they even move in, many owners are also seeking compensation from property developers in a bid to retrieve some of their losses, arguing that the original prices were set unfairly high given the current economic climate.

A 39-year-old homemaker surnamed Oh saw her life turned upside down recently when she received a letter from the state-run corporation notifying her that it will start seizing up to 50 percent of her husband’s monthly paychecks.

The news came after the couple failed to meet its repayments on a 470 million won ($417,036) loan they took out from Woori Bank to buy an apartment in Deoki New Town, Ilsan, Gyeonggi.

Oh has already had a villa in central Seoul’s Chungjeongno District seized by the corporation for similar reasons. It was worth 300 million won.

“Isn’t the bank too mean for taking my husband’s salary, even though it has already seized our villa?” Oh said.

Experts blame the nation’s long-stagnant real estate market. The prices of newly built apartments this year have fallen by up to 40 percent compared to three to four years ago, when owners first signed the contract to purchase them. 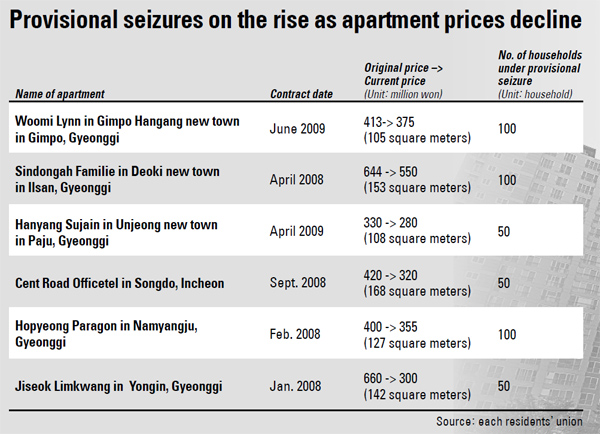 Some residents have sued builders, demanding apartment price cuts or requesting that their contracts be nullified.

According to industry insiders, 122,860 new apartments are due to be completed in five new towns in Pangyo, Dongtan, Gimpo, Gwanggyo and Paju by 2015. A substantial number of current and future residents are believed to have filed similar suits.

At Oh’s apartment complex, 90 neighbors have filed such suits. As residents have delayed repaying their mortgages citing ongoing court cases, banks began provisionally seizing their properties or salaries to recoup their loans, or at least the interest on them.

According to the unions representing residents in the five new towns, over 450 households have already had their assets taken.

Kim’s other home was seized by Cheongwon county in North Chungcheong after he used it as collateral on a 200 million won loan he needed to buy the second apartment, then failed to meet his repayment timetable.

“My [first] apartment is worth 400 million won,” Kim said. “One of my neighbors had his five bank books seized.”

Cho Nam-heui, head of the Financial Consumer Agency, warned that the finance industry’s aggressive moves against delinquent mortgage-takers “may threaten the livelihoods of ordinary people who are already feeling the pinch of the slowing economy and inflation.”

Banks said they are justified in seeking to recoup their loans.
“Some of these lawsuits have been going on for more than two years, and the overdue interest alone has snowballed in value to be worth tens of millions of won [per property],” said an employee at Woori Bank.

“When borrowers refuse to repay that interest, banks don’t have any other option but to seize their assets.”