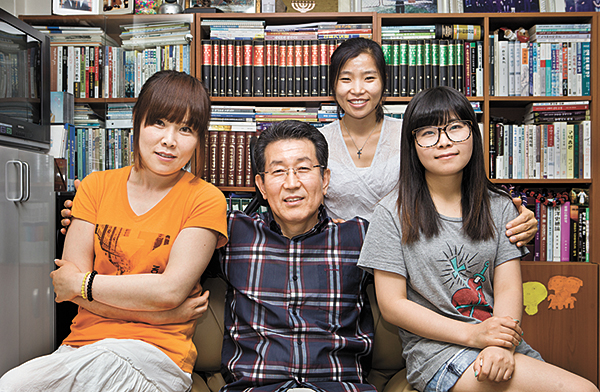 Three North Korean defectors who traveled across the United States from July 23 to Aug. 4 pose with pastor Chun Ki-won, middle. “I wanted to show them the real world,” says Chun. By Park Sang-moon


A group of North Koreans might have thought they came a long way when they arrived in Seoul. But after crossing the continental United States, they probably have gone farther than they ever thought they would .

“North Korean people have learned an erroneous world view and a distorted history, living in such a small world like a frog in the well,” says pastor Chun Ki-won. “I just wanted to show them the real world. Particularly, I hoped they would learn what liberty is in the United States.”

The 55-year-old Chun is founder of the Durihana Association, which has a church in Seoul and co-sponsored the trip with Grace Community Chapel, a U.S. church founded by South Korean immigrants. Chun is known for helping North Koreans in China defect to the South or the United States.

During the two-week trip, a total of 13 defectors traveled in chartered buses and visited 14 tourist attractions. Their journey began July 23, when they flew from Seoul to New York, then on to Niagara Falls, Chicago, Denver, Utah, the Grand Canyon and Los Angeles.

“The first place we visited was New York,” says Song Su-ryeon, a 21-year-old defector. “Surrounded by high-rise buildings, Americans seemed natural and their fashion was freestyle, expressing their personality.”

Jeong Byeol, 29, was most impressed by America’s natural wonders. “I was surprised to see two beautiful places, Bryce Canyon and Niagara Falls,” she says. “It was a stark contrast to North Korea, where nature has been largely destroyed.”

Park Ha-na, 32, agreed. “I was astonished by the wide territory of the United States. Chicago was just like a picture, embracing the scenic beauty of nature inside the city.”

A young North Korean woman, who asked not to be identified, said she felt sorry for people who remain under the reclusive regime. “When I was in the North, we were brainwashed that Americans were all ‘coyotes’ [bad people],” she says. “I came to realize that I was fooled, and how the truth is that the United States is a free and cozy place. Contrary to American life, life in the North was like a war every day. I feel really sorry for people in the North who don’t even know why they are dying.”

Along the way, the defectors also met with people from churches that had helped with their journey.

“I think American people are more relaxed and free compared to North Koreans,” Park says. “In the North, people mostly try to avoid strangers because they could be punished if they say anything against the regime. But in the United States, people talk to strangers first. The more we interacted with each other, the more I felt I was becoming like them.”

“The participants told me that the most memorable thing about the trip was mingling with different people, along with appreciating the beauty of nature,” Chun says. “We are planning the same trip with same itinerary for next year as well.”