For Chilpo jazz festival, the beat goes on Friday

For Chilpo jazz festival, the beat goes on Friday 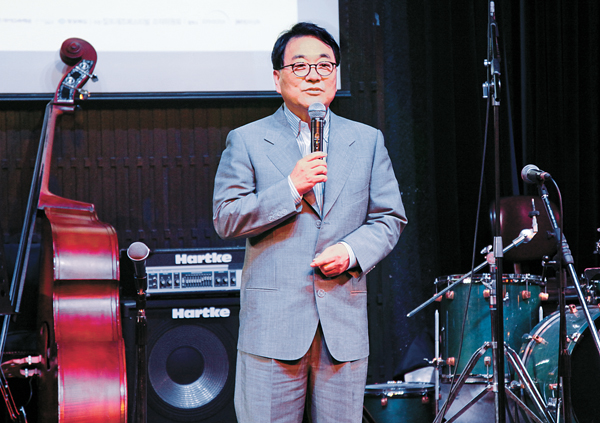 Hwang In-chan discusses next week’s Chilpo International Jazz Festival during a press conference at Once in a Blue Moon jazz club in Cheongdam-dong, southern Seoul. Provided by the festival

“What you eat and how you live are basically the same anywhere you go in Korea,” said Hwang In-chan, chairman of Daea Express Shipping Company and head of the organizing committee for the Chilpo International Jazz Festival.

“But one thing that is strikingly different is that in regional provinces, there aren’t any first-class performances. That’s why I decided to set up the jazz festival.”

Hwang has been in charge of the Chilpo International Jazz Festival organizing committee for six years. Noting that he travels extensively for business, Hwang remarked that in developed countries there is not such a large gap between the capital cities and the regional districts when it comes to the cultural lifestyle of people.

So in order to narrow the huge gap in Korea, Hwang located the jazz festival in the most open space on the east coast of Pohang: the beach. He adds that setting up the event on the beach makes it possible for more people to attend the festival. Hwang’s goal is to make the Chilpo festival one of the three main jazz festivals in the country, along with the Jarasum International Jazz Festival and the Seoul Jazz Festival.

When asked why he focused on jazz, Hwang replied that it is less expensive to invite globally recognized jazz artists.

He said he rejected classical music because he could never do better than the Seoul Philharmonic Orchestra.

Thanks to 200 million won ($177,600) in support from the city of Pohang and North Gyeongsang, the festival remains free of charge.

Hwang said the committee wants spectators to open their wallets to support area restaurants, gas stations and other businesses near the seashore to boost the economy of Pohang.

“In order for the festival to be successful, it should work in partnership with the local economy,” said Hwang.

The fact that spectators can enjoy the festival while feeling the cool sea breeze has become very popular with jazz fans, and last year about 5,000 people came down to the beach. This year’s festival will last for three days, and when the event marks its 10th anniversary in 2016, the chairman is determined to hold a 10-day festival.