Gymnastics coach from North revels in South’s gold in vault

Gymnastics coach from North revels in South’s gold in vault 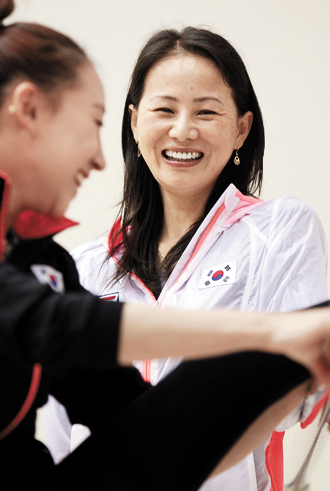 The first defector to coach a South Korean national gymnastics team, Lee Kyung-hee, 41, shared her joy as she watched Yang Hak-seon win gold in the men’s vault finals on Tuesday. She was known as North Korea’s “gymnastics fairy” when she was in her 20s, the same age Yang is now.

She said, “I am most proud that Yang was thinking about honoring his parents when he won gold although he had financial difficulties. Love for one’s parents is the foundation of a person’s mentality.”

Lee was able to sing the national anthem of North Korea four times in international gymnastics tournaments. Due to her record, she was praised by the “godmother of rhythmic gymnastics,” the president of the International Federation of Gymnastics Rhythmic Gymnastics Technical Committee, Maria Szyszkowska, last year.

Lee is very strict when it comes to training. Among gymnasts, she is well-known for her Spartan-like methods. If the gymnasts don’t achieve at least an 80 percent success rate, they can’t go home.

When she was a gymnast, rather than enhancing national prestige she wanted to honor her parents through her ability. And she expects her gymnasts to have the same mind-set.

As a gymnastics coach, she closely observed Yang every day. “He is a man of few words. Although undersized, he is stocky and shows consistency,” she says. “Although he is young, he overcame the pressure of being the last to compete.”

Including individual events, Lee won three medals at the 1991 Summer Universiade, which took place in Sheffield, England. It was a big deal for a gymnast from East Asia to win three medals at a tournament in Europe.

The North Korean government recognized her as an outstanding young athlete. She also married the son of a high-ranking official.

However, she soon became exposed to open societies as she entered tournaments in different countries. When she lost her husband in an accident in June 2007, she decided to head south.

Kim Ji-young, from the Korea Gymnastic Association, did not let a golden opportunity pass her by. Lee met her at the 1992 Barcelona Olympics. Kim appealed to her in November 2007. “Why don’t you help teach South Korean gymnastics,” Kim asked. “You were once a star in North Korea, a leading country in gymnastics.”

In January 2011, Lee became an exclusive coach for the gymnastics team.

Rhythmic gymnastics is divided into two divisions: team and individual. Gymnasts including Choi Ye-na are part of the gymnastics team, but placing 20th at the Artistic Gymnastics World Championships in Tokyo last year, they didn’t receive a chance to enter the Olympics.