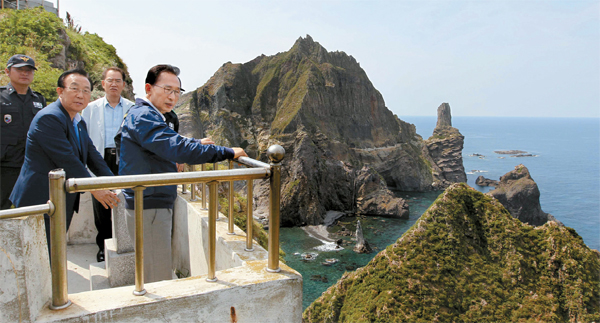 President Lee Myung-bak, right, looks around Dokdo yesterday. He is the first incumbent president to make a visit to the islets. [YONHAP]


President Lee Myung-bak yesterday made a landmark visit to Dokdo, Korea’s easternmost islets - a symbolic trip no other president has made.

The president’s unprecedented trip to the islets, located 87.4 kilometers (54 miles) southeast of Ulleung Island, is considered an effort to send a message to reaffirm Korea’s sovereignty over its easternmost territory, over which Japan has frequently claimed control.

“Dokdo is genuinely our territory,” Lee said after meeting with members of the Dokdo Guard Unit. “It is a place worth sacrificing our lives to defend. Let us defend it with pride.”

During his 70-minute stay on the islets, Lee received a briefing by Superintendent Yoon Jang-soo, head of the Dokdo Guard. The president also toured the guard post and the rock bearing the title “Territory of Korea.” Lee laid flowers in front of the memorial monument commemorating Koreans who died while guarding the islets. Lee’s visit came at a sensitive time. Next week, Korea celebrates its liberation from Japan’s colonial rule on Liberation Day on Wednesday.

Lee first flew to the eastern coastal city of Gangneung, Gangwon, yesterday morning. He then took a helicopter to visit Ulleung Island and went to Dokdo. At 1:57 p.m., the presidential helicopter landed at Dokdo, and Lee became the first incumbent Korean president to step on the islets.

Earlier in the morning, the presidential office said Lee would visit the islets if the weather permits.

Throughout Lee’s trip, the Korean military was on high alert. The Air Force’s F-15Ks and KF-16 fighter jets and the Navy’s ships and submarines reinforced their patrols.

Ministers of culture and environment accompanied Lee as well as novelists Lee Moon-youl and Kim Joo-young. 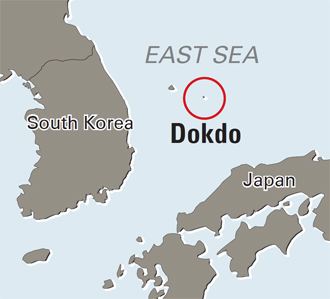 While the Blue House explained that Lee’s Dokdo visit was part of his trip to Ulleung Island with the purpose of stressing the importance of environmental preservation, it was the strongest political and diplomatic action to date to counter Japan’s latest series of territorial claims.

Last week, Japan published its 2012 defense white paper and reiterated its claim, calling the islets by the Japanese name Takeshima. Seoul demanded Tokyo immediately correct it. Tokyo also made its first-ever complaint to Seoul on Wednesday for claiming Dokdo as Korea’s territory in Korea’s diplomatic white paper. Seoul dismissed the complaint out of hand.

Since the Republic of Korea was established in 1948, it was the first time a Korean president has visited Dokdo. Prime Minister Han Seung-soo, who visited the islets in July 2008, was previously the highest-ranking government official to make the trip.

The recent series of events surrounding Dokdo quickly strained diplomatic ties between the two countries, which have already soured due to issues related to Japan’s wartime crimes such as conscription of laborers and sex slavery of Korean women. The Japanese government yesterday chafed at Lee’s surprise visit to Dokdo.

“We summoned Muto home to express our protest,” said Japanese Foreign Minister Koichiro Gemba. “We didn’t decide when to send him back.” The Japanese media also reported yesterday that Seoul informed Tokyo ahead of Lee’s trip, but the Blue House refuted it. A senior presidential aide said the Korean president doesn’t need to inform another government about a visit to Korea’s territory.

Japanese Transportation Minister Yuichiro Hata also said yesterday he will pay a visit to the Yasukuni Shrine on Wednesday when Japan commemorates the 67th anniversary of its World War II surrender. Because the shrine for the Japanese war dead is where 14 Class-A war criminals were interred, any visit to Yasukuni by high-profile politicians and government officials has always been controversial.

Chief Cabinet Secretary Osamu Fujimura, however, said yesterday that Prime Minister Yoshihiko Noda and his cabinet members would not officially visit the shrine this year.

As Tokyo stepped up its complaints, Seoul’s Ministry of Foreign Affairs and Trade said that the Lee administration will not tolerate Japan’s protest against Lee’s visit to Dokdo.

Foreign Minister Kim Sung-hwan had a 10-minute telephone conversation with his Japanese counterpart Gemba and reaffirmed Korea’s sovereignty over the islets. Kim also expressed serious disappointment at Tokyo’s response, urging Japan to face history and work to improve the two countries’ relations for the future.