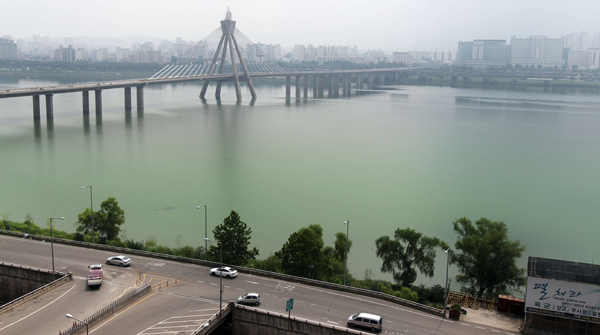 The Han River near Gwangjin District, eastern Seoul, is tinted green. The Seoul Metropolitan Government yesterday issued an advisory warning for algae content in the water in the Han River between the Gangdong and Jamsil bridges in eastern Seoul at 2 p.m. [YONHAP]

The Seoul Metropolitan Government officially issued an advisory warning for algae content in the water in the Han River between Gangdong Bridge and Jamsil Bridge, in eastern Seoul, at 2 p.m. yesterday.

The municipal government said it is the first warning issued in the Seoul area of the Han since July 2008.

In a press briefing held yesterday at City Hall in Jung District, central Seoul, the city government announced the result of examination of five drinking water reservoirs near the Jamsil Underwater Weir in the Han River.

The advisory warning was issued as the water has exceeded the standard twice in a week.

“Though the advisory warning is issued, the tap water for Seoul is safe as we have strengthened the water treatment,” a spokesman from the Seoul Metropolitan Government said.

“But we recommend people abstain from water activities in the Han River, especially those who have sensitive skin.”

The city government said the dominant toxin detected from the blue-green algae is Anabaena, a type of harmful bacteria.

Though massive algal blooms have spread in many rivers and key water sources nationwide, threatening the safety of drinking water, the government is struggling to cope with it.

The government has tried to use red clay to prevent algae from seeping into water purification plants.

However, it isn’t considered a perfect solution because the clay might produce secondary pollution, and is used in limited amounts

“[Red clay] only has temporary effects,” Lee Jae-jeong from the Paldang Water Quality Improvement told the JoongAng Ilbo. “We are trying to remove litter from the lake and tighten control on water pollution.”

Seoul citizens might just have to wait for the weather to change.

“The best thing for now is wishing for rain and for the temperature to drop,” said Hong Yong-seok, a researcher from the Korea Environment Institute.