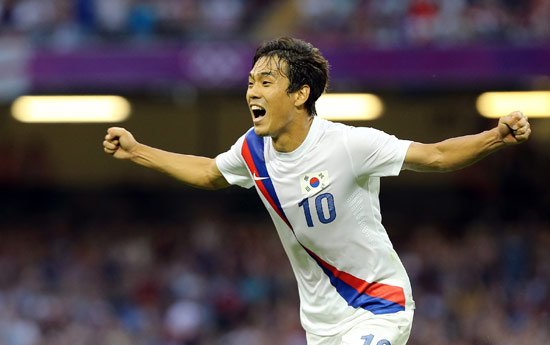 In the 38th minute, Park, taking control of the loose ball near center, charged up the middle and danced his way in among three defenders for the opening goal. 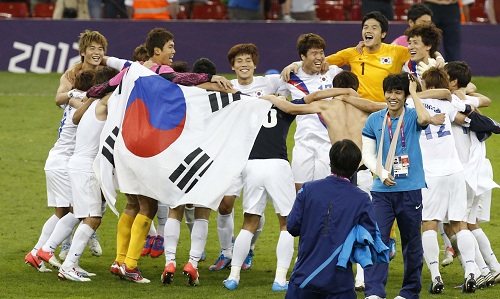 Koo, team captain, capitalized on a breakaway chance in the 57th and put a right-foot strike past Shuichi Gonda in the net, despite having defender Daisuke Suzuki all over him.

Head coach Hong Myung-bo called his side "the dream team," because it overcame adversity to achieve the dream of winning an Olympic medal.

"We're the dream team, not because we have all the star players, but because we accomplished our goal from a humble beginning," Hong said. "I want to thank and congratulate our players. I hope that they don't stop here and that they continue to develop for the benefit of Korean football."

This was South Korea's ninth Olympic football tournament, and the country had reached the quarters only twice before.

South Korea beat Britain in the penalty shootout in the quarterfinals before getting blanked by Brazil 3-0 in the semis.

Park, 27, was one of three "wild card" selections for South Korea. Olympic football tournaments are open to players 23 or younger, but countries are permitted to pick up to three players over the age cap.

Winger Kim Bo-kyung almost made it 3-0 for South Korea in the 60th, but Gonda got his hand on the shot from the arc before the ball rang off the right post.

The sides opened tentatively and Japan threatened first near the half-hour mark. Hiroshi Kiyotake curled a shot from just outside the arc, forcing South Korean goalkeeper Jung Sung-ryong to make a diving save. In the 37th, Hiroki Sakai's header off a cross went just wide of the left post.

Japan dominated the ball in the second half following Koo's score, but couldn't break through the crowded South Korean zone.

Japan had a goal disallowed with two minutes left, with Kenyu Sugimoto getting a yellow for pushing down Jung as Maya Yoshida headed in a corner into a gaping net.

In a testy game between fierce regional rivals, seven yellow cards were issued, including three to South Koreans in a 12-minute span in the first half.

The bronze medal exempts the footballers from mandatory military service. An Olympic medal of any color grants all male athletes such exemption if they haven't already served in the armed forces.

Earlier this year, Park came under fire for postponing the service by acquiring a 10-year residency visa in Monaco last year. He'd played for AS Monaco in the top French league before joining Arsenal in the Premier League.

Hong, the head coach, said Park was never putting the military service exemption ahead of the victory, and added the Olympic team members will now have the chance to make even bigger contributions without disruption to their careers.