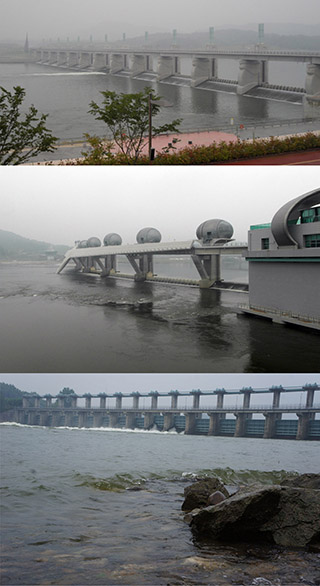 The government decided to open the floodgates and discharge water from dams and reservoirs upriver from the Han River to dilute the green algae that has spread to the Paldang Reservoir, which is the drinking water source for 10 million Seoul citizens.

The Ministry of Land, Transportation and Maritime Affairs announced yesterday that it is discharging five times more water than usual from the Chungju Dam in North Chungcheong.

The water will travel down the Namhan River to dilute the algae concentration in the Paldang Reservoir.

It also discharged water from other reservoirs, including the Ipobo and Yeojubo reservoirs, which were constructed as part of the government’s four-rivers restoration project to improve water quality and to help with water shortages.

“The discharge will reduce 30 to 50 percent of the green algae in the Paldang Reservoir in the next one to two days,” said Jeong Mi-seon, an official of the water quality management division of the Seoul Metropolitan Government.

It will take 29 hours for the discharged water to reach the Paldang Reservoir.

It is the first time for the government to discharge water from the multipurpose dam and the pools created during the four-river projects at the same time to improve water quality.

Meanwhile, the Seoul Metropolitan Government, which issued its first algae advisory warning on Thursday, said no algae-related toxins were detected in the sections of the Han River where the warning was issued after running tests.

The city government said it also has examined water from five water intake stations near the Jamsil Underwater Weir in the Han River, but found no toxic substances.

In Paldang, however, minute amounts of microcystin, a harmful bacteria that can damage the liver of humans, was found for the first time since 2001.

But the municipal government said the amount is 0.107 microliters per liter (of water), which is only 10 percent of the WHO’s standard, one microliter per liter.