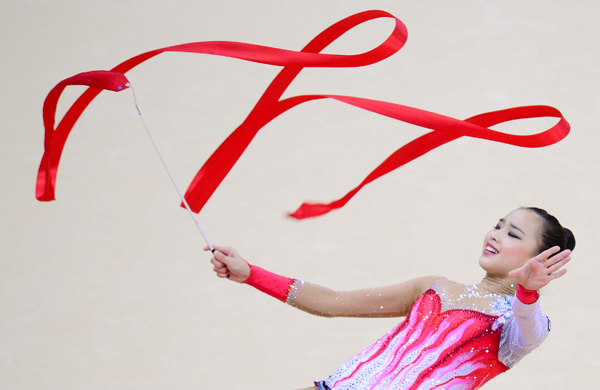 Korea’s 52-year wait for an Olympic gold medal in gymnastics ended when Yang Hak-seon stuck his triple-twist in the men’s vault last week. And the country’s gymnastics glory didn’t end there. Son Yeon-jae, Korea’s most popular female gymnast, provided the latest proof that the country’s program is steadily on the rise.

Son also became the first East Asian athlete to compete in the Olympic finals in rhythmic gymnastics, a discipline that has long been dominated by Eastern Europeans. Evgeniya Kanaeva of Russia won the final at London, followed by her fellow Russian Daria Dmitrieva, Liubou Charkashnya of Belarus and Azerbaijan’s Aliya Garayeva. Deng Senyue of China, 20, finished 11th, one place away from also qualifying for the finals.

“I can’t believe that I finished fifth at the Olympics. I have gained the confidence that I can do it,” Son told reporters after the final. “I will have a bigger goal at the next [Olympic] event and will try to earn a medal.”

The youngest of the 10 finalists, Son has shown rapid growth since competing in senior events since 2010, and some local analysts in the sport believe she will have a better shot at a medal during her second Olympic outing in Rio de Janeiro in 2016.

The bronze medalist at the 2010 Guangzhou Asian Games, Son avenged two athletes who had better performances than the Korean at the China event. Anna Alyabyeva of Kazakhstan, the gold medalist at Guangzhou, and Ulyana Trofimova of Uzbekistan, the silver medalist, finished 15th and 20th, respectively, in London.

Son entered the London Olympics after a long period of training in Russia. During her time overseas, she has competed in some 10 international competitions. Her current coach Yelena Nifiodova is Russian.

Son scored a total of 111.475 points from the hoop, ball, clubs and ribbon routines in the individual all-around final, only 0.225 points behind the bronze medalist Charkashyna. Kanaeva defended her title from Beijing with 116.000 points, while Dmitrieva finished with 114.500.

Son scored over 28 points in the hoop, ball and ribbon while finishing with 26.750 in clubs due to a drop.