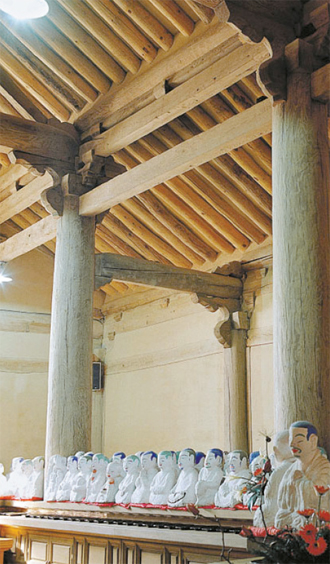 The Eunhaesa Temple is said to have been built in the first year of King Heondeok’s reign (809) of the Silla Dynasty under Haeansa Temple. Due to frequent fires, the temple has been reconstructed multiple times.

The Geojoam Hermitage was built much earlier than the Eunhaesa Temple, though it is not clear when it became affiliated with Eunhaesa Temple. Yeongsanjeon Hall was built in 1375, the first year of the reign of King U (1374-88), and was renovated many times. A statue of the Buddha and 526 stone arhans, which are the Buddha’s disciples, are enshrined in the building.

The building consists of seven front compartments and three side compartments. The gable-roofed, five-girder structure has a simple pillar-centered bracketing system.

The bracket and beam arrangements, the truss, and its support under the roof ridge are of an ancient style. It is regarded as an important cultural asset since it represents the early stage of the bracket-on-column style.