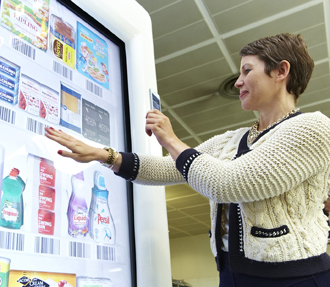 A woman buys items using her smartphone by scanning quick response (QR) codes from Tesco’s Smart Virtual Store at Gatwick’s North Terminal in England, on Friday. Homeplus, the Korean unit of the British retail giant, said it exported the virtual store to its British headquarters after launching it at Seolleung Station in southern Seoul last August. Provided by the company