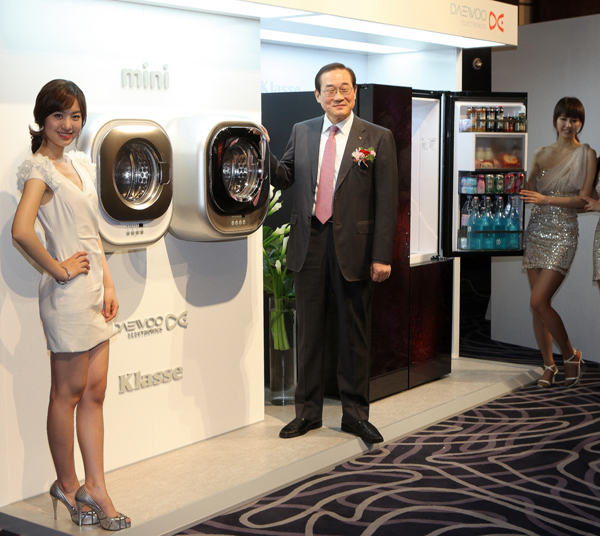 Daewoo Electronics CEO Lee Sung introduces the company’s Mini, a small wall drum washer, on April 5 at a hotel in central Seoul. The sixth attempt to sell the nation’s third-largest electronic appliance maker, which is now in creditors’ hands, is scheduled to start on Aug. 21. Provided by the company


After five failed attempts to sell Daewoo Electronics, creditors will try again next week to conclude their decade-long search for a new owner of what once ranked as Korea’s top maker of electronic appliances.

“The main bid is scheduled to take place on Aug. 21, according to the creditors, and they intend to pick a preferred bidder by the end of this month,” said a spokesman for the company.

Five local and foreign bidders submitted letters of intent by mid-July to the majority stakeholder Korea Asset Management Corporation (Kamco), the creditors said, while Germany’s Bosch-Siemens pulled out later last month. Creditors hope to complete the sale by the end of this year.

Industry insiders claim the latter has joined hands with Ktheinvestment, a local private equity fund, but Daewoo has not confirmed this. Nonetheless, the possible consortium has attracted much interest given that the private equity fund was founded and is run by Lee Ki-tae, former vice chairman of Samsung Electronics.

Lee left the Samsung unit in 2009, when it was known for its Anycall brand, just before it propelled to the world’s top ranks of handset makers. On the back of its immensely successful Galaxy phones, the company is now the world’s No. 1 producer of smartphones.

Dongbu Group, the only Korean conglomerate participating in the bid, seems determined to acquire the former unit of failed Daewoo Group - a domestic electronics powerhouse in the 1990s - due to the synergy effect it sees with its existing businesses. Dongbu’s diverse business portfolio ranges from chips and LEDs to steel-making, robots, logistics, agriculture, biotechnology and finance.

“We’ve been contemplating launching a new business that can create a synergy effect with our high-tech sector, and acquiring Daewoo Electronics would help us achieve this,” said a Dongbu employee.

The upcoming bid comes after creditors gave up on two attempts to sell the company last year. Iran’s Entekhab Industrial Group was initially interested, but this deal fell through in May 2011, while Sweden’s Electrolux - which is again in the running now - looked poised to snap it up before negotiations soured. 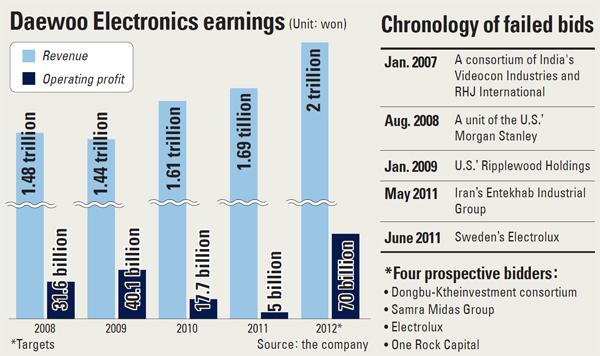 The first attempt to sell occurred in 2006, when a consortium made up of India’s Videocon Industries and RHJ International collapsed due to disagreements over price.

The company, which is based in Myeongdong in central Seoul, was placed under a debt-restructuring program after its parent Daewoo Group went bankrupt in 1999. Its biggest shareholder is the debt-clearing house Kamco, which controls a 57.4 percent stake. Woori Bank is overseeing the sale and owns 5.37 percent. Korea Exchange Bank has 6.79 percent.

Over the course of seven years of unsuccessful deals, Daewoo’s value has more than halved from more than $700 million to 350 billion won, according to analysts.

When asked in April which new owner he would prefer to see installed, Daewoo CEO Lee Sung was evasive with reporters, merely saying that, “It’s not our decision. We’re the object of an M&A.”

Later, a spokesman for the company said, “We don’t mind if the winning bidder is foreign or domestic,” adding that Daewoo hopes the new owner “has a strong desire to raise the business to the next level.”

Having improved flagging sectors such as TVs, air-conditioners and semiconductors, it is now focusing more on so-called white goods, such as refrigerators, washing machines and microwaves.

Amid fierce competition between local electronic appliance giants Samsung and LG in the domestic market, Daewoo has found a new niche market with creative ideas and technologies. For instance, its Mini, a small wall drum washer, the first of its kind in the world, emerged as an unexpected hit recently.

The energy-saving appliance, which is one-sixth the size of ordinary washing machines and weighs in at just three kilograms (6.6 pounds), was unleashed in May. It sold more than 4,000 units domestically in just two months, and Daewoo is currently in talks with some 20 countries on potential export deals, the spokesman added.

Daewoo is focusing on foreign markets on the back of its strong overseas network, which was set up in the 1990s. More than 80 percent of its revenue now comes from abroad, with strong performances in Central and South America.

In Mexico, the company owns 65 percent of the washing machine market, while in Peru, its two-door refrigerators and drum-washing machines are best-sellers. In Venezuela, its microwave is a leading product.

“Should Daewoo find a credible owner, it has a high potential for further growth thanks to its solid brand value, technologies and overseas network,” said Kwon Sung-ryul, an analyst with Woori Investment & Securities.

Its relentless efforts to normalize its operations and improve sales led to a turnaround in 2008, after which it has consistently posted an operating profit.

The company expects to easily meet its targets for this year of 2 trillion won in revenue and 70 billion won in operating profit, which would be a 14-fold improvement from one year earlier.