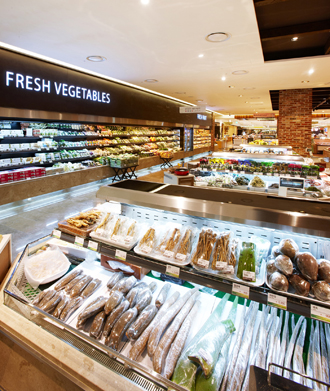 Revitalizing food divisions is emerging as a hot trend for major department stores, although it seems untimely in the face of the economic slowdown.

Major department stores are focusing on renovating their food sectors or launching exclusive food markets, as sales of food remain steady as opposed to plunging sales of other products.

Enhancing the quality of food in stores is also a result of department stores striving to draw and maintain customers who are relatively more loyal to the food division than other product divisions.

AK Plaza’s Bundang branch, a department store franchise owned by Aekyung Group, has embarked on renovating its food sector with the aim of reopening it in early September.

The concept of the new food sector is “modern and luxury,” with a variety of high-end products, most of which are aimed at high-income households in Bundang, one of the wealthiest regions in Gyeonggi.

To cater to the taste of wealthy consumers, the new food division will feature a specialized food department with a premium cheese zone, a first-class rice bar, sushi bar and a duck cafe, along with an expanded supermarket division.

The premium cheese zone will display high quality imported cheese, as well as three major delicacies: foie gras, caviar and truffles. The rice bar will sell first-class organic rice and the sushi bar and the duck cafe serving Peking duck will have chefs from first-rate hotels.

It will also strengthen its food court by housing high-class restaurants such as Hwangseong-ga Kalguksu, a renowned restaurant in Samcheong-dong, central Seoul, and Italian deli La Bocca, originally in Itaewon, as well as Papabubble, a Spanish handmade candy shop.

Hyundai Department Store’s Mia-dong branch in Seongbuk District, northern Seoul, has already launched its newly refurbished food sector in June, after four months of renovation. Tailored to customers who consist of working couples in their 20s and 30s, the department store focuses on packaging a small amount of food and instant side dishes for one easy meal.

An expansion of the organic food section targeting young parents with children is noticeable as well.

The store has also introduced high-quality traditional Korean food and beverages from across the country to boost its image.

The luxurious Gallaria Department Store in Apgujeong-dong, southern Seoul, the most high-end in the city, has also greatly renovated its food department recently, seven years since the last renewal in 2005.

Despite the disastrous sales downturn in recent months, the department stores’ commitment to upgrading their food divisions is a strategy to fight the decline.

The sales figures in the food sector of Lotte’s department stores rose 3.5 percent in the first quarter of this year compared to the same period last year, while increasing 6.5 percent in the second quarter when the economy shrank even more severely.

It is two- to three-times higher than the sales growth of all products combined in the same period, which stood at 1.1 percent in Q1 and 3.7 percent in Q2 on-year.

In addition to that, the department stores take note that customers are much more loyal to their food departments than to other departments.

Revenue after the renovation of a food division also improves, according to the department stores.

The main Lotte Department Store, which reopened its renovated food department in February, saw its sales increase by 17.4 percent in May and 34.2 percent in June on year.

“Due to the nature of food departments which allow a variety of distinct features depending on the vendors and stores, it is ideal for increasing consumer loyalty,” said an employee at Lotte Department Store. “We are risking a lot in putting efforts into building up the food division, with no sign that the economic situation is going to get better.”