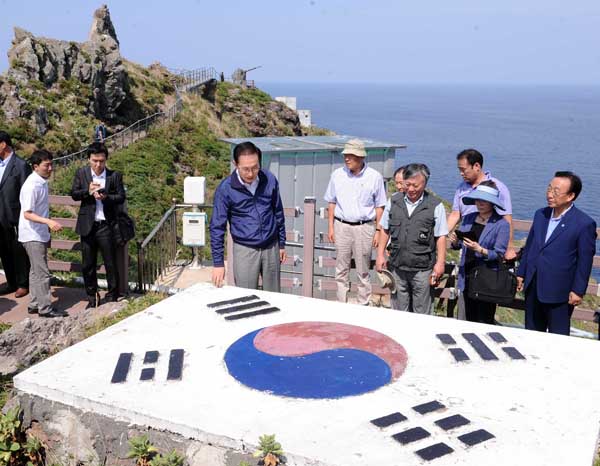 In response to President Lee Myung-bak’s surprise visit to the Dokdo islets on Friday, Tokyo announced it is considering taking the territorial dispute to the International Court of Justice.

Japanese Foreign Minister Koichiro Genba told reporters during a press conference on Saturday that the Japanese government will soon make the request, one day after it recalled Masatoshi Muto, the Japanese ambassador to Seoul.

“We will consider taking all measures to resolve the issue peacefully based on international law,” said Genba. “We need to make sure the claim of sovereignty reaches the international community.”

Under the current laws, in order for the ICJ to accept a request, both countries must agree to bring the case to the international court. The Korean government has suggested it would reject the request.

A senior official from the Ministry of Foreign Affairs and Trade said yesterday that the Korean government has decided to not react to Japan’s move.

“Because Dokdo is clearly our territory, the Korean government would not respond to Japan’s move of bringing the issue to the ICJ,” the official said.

This is the third time Tokyo has proposed taking the issue to the ICJ.

In 1954, when Korea built a lighthouse on Dokdo, the Japanese government suggested that they bring the case to the ICJ.

But the Korean government turned down the request, saying it “already has territorial ownership of the islets, so [Korea] doesn’t have to confirm it at the court.”

In the early 1960s, when both countries were in the process of improving their deteriorated diplomatic relationship, Japan also made the same suggestion, but Korea turned it down again.

“The reason why we hadn’t proposed a third [case] was because we were considerate of the impact that it could have on the bilateral relationship with Korea,” Genba told Japanese reporters.

“Now, we don’t need to keep that consideration anymore. Korea has a duty to respond.”

The Kyodo News Agency has reported that the Japanese government is mulling over suspending bilateral customs between the two countries, including the annual summit meeting. This year, it’s Prime Minister Yoshihiko Noda’s turn to visit Korea, following President Lee’s visit to Kyoto in 2011.

In addition to the diplomatic countermeasures, the Japanese government is also considering the creation of a new body to deal with territorial disputes.

Japanese local media, including the Nihon Geizai Shimbun, reported that the Japanese government is trying to take as strong a stance as possible in protest against President Lee’s visit. But they said there are few effective measures.

In the midst of the heightened tension between the two countries, a Japanese man threw a brick toward the Korean consulate in Hiroshima at around 3 a.m. on Saturday, breaking a window of the building. No injuries were reported.

Japanese local media including the Kyodo News reported yesterday that the man gave himself in to the police and said that he is a member of a far-right civic group. He said he was prompted by President Lee’s visit to Dokdo.

The South Korean Foreign Ministry has warned Korean residents in Japan to be cautious about growing anti-Korean sentiment with conservative civic groups staging rallies in the country.