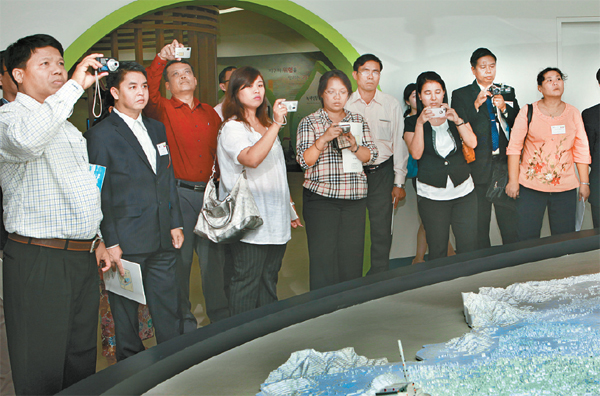 Myanmar officials learn how alternative energy is produced from waste at a resource recovery facility in Gangnam, southern Seoul, on July 13, as part of a 12-day public administration training program. By Park Sang-moon


*Catchy pop music and sentimental dramas have blown Hallyu fever far and wide, but countries are turning to Korea for a different reason - to share its development experience. Sixty years ago, Korea was a war-torn country. r>But after colonization, war and dictatorship, the South has emerged as the 12th-largest economy in the world. Korea is the only country to transition from an aid recipient to a donor nation. Developing countries are zoning in on the Korean example in various sectors including governance and agriculture, along with its successful entertainment industry, keen on learning the “secret.” And Korea, too, is eager to showcase the development it has undergone in recent years, from following and imitating to being able to share knowledge. Going forward, the Korea JoongAng Daily will be running a series of articles focusing on the enterprising people who visit Korea to learn valuable skills they can take back home with them. - Ed.


Inside a resource recovery facility in southern Seoul, a group of high-level officials from Myanmar watched a massive crane plunge into a refuse pit and clamp down on several tons of waste to be sent off to the incinerator.

Their foreheads gleamed with sweat as they peered through the window of the fifth-floor viewing room of the Gangnam Resource Recovery Facility, one of four in the city, on a Friday afternoon, July 13.

Even from behind the glass the sweltering heat could be felt from the furnace flame, which has to be at a temperature between 850 and 950 degrees Celsius (1,560 to 1,740 Fahrenheit) to produce enough energy to generate electricity and heat water.

They stared down at the grotesque bottomless pit, which can hold 900 tons of refuse produced by Seoulites.

“Why doesn’t it smell here?” or “Doesn’t incineration create more pollutants?” were questions they had.

No, filters are used in the incineration process to prevent the emission of dioxin and other pollutants, replied the guide. Since Seoul expects the city’s main landfill to reach maximum capacity by 2044, it had to find alternative measures for waste disposal, he explained, and do it in an environmentally friendly way.

These 21 officials from Myanmar, most of whom visited Korea for the first time, were at the facility as a part of a two-week training program focusing on public administration, hosted by the Central Officials Training Institute (COTI), the Ministry of Public Administration and Security, and the Korea International Cooperation Agency (Koica) from July 9-20.

The average age of the officials was 45, as they were all mid- or high-level officials with years of experience.

High-level officials from Myanmar watch trash being incinerated to be made into energy at the Gangnam Resource Recovery Facility on July 13, as part of a two-week public sector training program hosted by the Central Officials Training Institute, Ministry of Public Administration and Security and the Korea International Cooperation Agency. By Park Sang-moon


COTI trains some 10,000 participants through 100 courses in one year, while Koica ran over 30 educational programs last month in areas including economic development strategy, administration development, agricultural leadership and engineering for countries including Afghanistan, Nigeria, Iraq and Haiti.

The International Public Sector Development Program for Myanmar is in its third year, but “This year is very significant because your President Lee Myung-bak came to our country and met our president,” said Kyaw Soe, 42, deputy director general of the Union Civil Service Board, who has participated in training programs around the world.

President Lee made a landmark visit to Myanmar in May, the first South Korean president to do so in 29 years.

Soe had been at his current post for over two years but in the past decade has served in the Ministry of Foreign Affairs and also in national defense.

“We share the same experience as Korea,” he added. “For over 100 years, Myanmar was under British colonial rule, and we also underwent occupation by the Japanese.”

British colonial rule of Myanmar lasted between 1824 and 1948, with a three-year hiatus when the country was occupied by the Japanese between 1942-45 during World War II.

Though established as a parliamentary democracy after independence, the country went through a rocky period and faced authoritarian military rule, isolationism and political suppression.

In March 2011, Thein Sein, a moderate, was elected president and has shown reformist policies, including releasing some political prisoners.

“Especially this year, the lectures and programs are very relevant to our national cause since we are transforming into a democratic state,” Soe said.

Despite criticism of Myanmar from the international community over the years, especially for its human rights violations, on July 11, the White House stated it will ease sanctions on Myanmar. Also, the first U.S. ambassador to Myanmar since 1990 arrived at his posting.

Dr. Eun Jae-ho, senior researcher at the Korea Institute of Public Administration, is often invited as a guest lecturer on good governance and sustainable development for such training programs, including for the Myanmar officials. He has spoken with officials from numerous countries, including Bhutan, Cambodia, Iraq and Tunisia, both in Korea and in their respective countries.

When officials ask the popular question of what is the secret to Korea’s development, he said his reply is that “Korea was able to develop so rapidly because of leadership and also the will of the people. Koreans too went all over the world on training programs and brought in officials from developed countries to train us.”

Sixty years ago, Korea was a war-torn country, and countries like Myanmar were more economically advanced, he said.

But after colonization, authoritarian rule and a short-lived democracy overthrown by military coup d’etat, Korea emerged in the last 1980s as a lasting democracy and has also grown into the 12th-largest economy in the world. And more nations have shown interest in sharing the Korean boom in government, education, economy, medicine, industry and even the entertainment business, which some call a “miracle” but Eun calls “hard work.”

“Cities always develop quicker than rural areas, and I grew up in a countryside that was still not developed. When I share that experience in lectures, people find that more approachable,” said Eun. Korea’s tumultuous history makes it more relatable to the situations in many developing nations.

But he admits that these training programs are often too short of a period of time to really delve into the given topics. “Truthfully, in a short period of time, in a two- or three-hour lecture, what can you really learn about policy or administration? But, what I hope they will learn in that time is about changing their mind-sets.”

Director of the civil service selection and training department, Thet Thet Kyaw, 38, has worked in the same division for the past 14 years. Before that, she was a bank clerk.

Despite being rich in natural resources, Myanmar is the second-poorest country in Asia on a per capita basis.

She stated she was impressed with the recycling system here. “We need to focus on how to take care of future resources and on how to develop in a sustainable way and not just rapidly.”

She wants to see a waste recovery system implemented back home. “People don’t separate garbage, and it’s important to keep the country beautiful for the next generation.”

A fan of Korean pop music and dramas, Kyaw said her favorite part of the program was in fact the cultural experiences, especially Nanta - a performance combining Korean percussion with kitchen utensils, something she wants to bring her family to see.

The program includes lectures on policy making and public administration and visits to research, government and industrial centers, like visits to Posco and Samsung Heavy Industries.

However, Shim Young-jae, director of the office of international training and cooperation at COTI said, “The cultural experience is also an important aspect of their training program because these officials who traveled from abroad can go out and see Korean society with their own eyes.”

After the resource facility, the officials headed to the Ministry of Public Administration and Security in central Seoul.

Rhim Bo-young, deputy director of the ministry’s information planning and coordination division, said that as Korea ranked first in the UN e-governance survey for two years in a row, more countries became curious about Korea’s system over the past two years.

So far, MOUs have been signed with 14 countries, and an MOU is in the works with Myanmar as well, which is likely to be finalized when the country’s minister visits Myanmar this coming October.