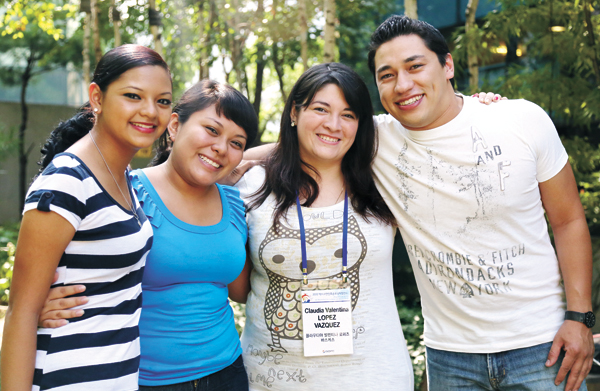 The descendants of first-generation immigrants in Mexico (from left, Anarosa Mendoza Acosta, Candelaria Joseline Lee Vargas, Claudia Valentina Lopez Vazquez and Eduardo Sanchez Kim Sarabia) arrive in Korea on Tuesday, invited by the Overseas Korean Foundation to experience the culture of their motherland. Provided by the Overseas Korean Foundation


On April, 4, 1905, seven months before Korea and Japan concluded the Protectorate Treaty, 1,033 Koreans boarded a ship from Incheon Harbor bound for the unfamiliar land of Mexico.

They were on their immigration path with their families and cousins after finding out through an advertisement that they’d be able to earn money working on Mexican farms.

They were from different backgrounds: veterans, farmers and ruined yangban, or aristocrats.

After a month of sailing, they arrived at the Salina Cruz Harbor, where they transferred to another boat and then took a train for around 10 days. On May 15, they finally arrived in Merida, the largest city on the Yucatan Peninsula.

They were the first Koreans to set foot in Latin America.

On Tuesday, 33 descendents of these first-generation immigrants arrived in Korea.

They were invited by the Overseas Korean Foundation to experience the culture of their motherland.

For a week, they will hear lectures on Korean history and visit cultural sites in Seoul, Ulsan and Gyeongju in North Gyeongsang.

At the opening ceremony of the program, the JoongAng Ilbo sat down with four of the 33 descendents for an interview in simple Korean.

They were third- or fourth-generation descendents of Koreans in Mexico.

Claudia Valentina Lopez Vazquez, 16, is a fan of K-pop. She said she was able to learn about her roots through popular Korean music.

“I was vaguely told that I’m a descendent of a Korean family, but I didn’t know anything about my roots,” she said. “But as I became a fan of K-pop, I got to study my family history.”

Based on growing curiosity about her homeland, she has studied Korean for more than one year and has also learned the Korean traditional instrument, janggu, a double-headed drum.

Candelaria Joseline Lee Vargas, 17, also started learning Korean a year ago. Vargas’ grandparents are both Koreans and that is why she uses Lee, a Korean surname, in her name even now.

“It’s been seven months since I started attending a Korean language course,” she said. “I learned ‘Arirang’ [traditional Korean folk song] and also the national anthem.”

Mendoza added, “My dream is to work as an industrial engineer. I am very much interested in learning about Korea’s advanced technology.”

Eduardo Sanchez Kim Sarabia, 25, enjoys cooking Korean food. Whenever there is a family gathering, Sanchez has bulgogi, or barbecued beef, and Korean dumplings.

“I make delicious bulgogi,” he said, noting that he hopes to become a Korean food chef. “I want to learn Korean cooking here. There are many similarities between Korean and Mexican food in that there are many spicy dishes.”