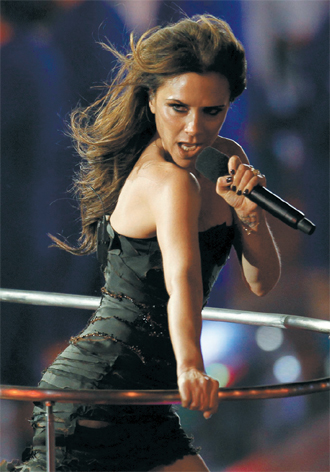 Victoria Beckham performs with The Spice Girls during the closing ceremony at Olympic Stadium on Sunday. [REUTERS/YONHAP]

But which generation? When band members first sang “My Generation,’’ they were in their 20s. Now they are pushing 70.

Like the Olympic torch passing from one runner to another, the London Games’ closing ceremony was an all-ages affair designed to show the flame of British creativity leaping from one age group to the next.

The 21-year-old singer Ed Sheeran sang “Wish You Were Here’’ with members of Pink Floyd and Genesis. Jessie J belted out “We Will Rock You’’ with Queen’s Brian May. The Kaiser Chiefs played The Who’s “Pinball Wizard.’’

The Spice Girls took us back to the “Cool Britannia’’ 1990s and the Pet Shop Boys to the synth-loving 1980s.

A ceremony that director Kim Gavin called an “elegant mashup’’ of music and creativity was designed to show the British Invasion never ended.

So there was Annie Lennox and George Michael, who started in the ’80s - but the roars that greeted Michael’s “Freedom’’ and Lennox’s “Little Bird’’ showed both are going strong.

If that was too old hat, there was One Direction, boy band of the moment, as well as Tinie Tempah, Jessie J and Taio Cruz who performed their own songs, then a Bee Gees track from the golden age of disco.

And if that was all insufficiently quirky, there was a brass band playing Madness and a Guards band in scarlet tunics and bearskin hats playing Blur.

It wasn’t just about the music. Gavin said he wanted to show how “U.K. culture, media, music are locked together to create the next big thing.’’ AP