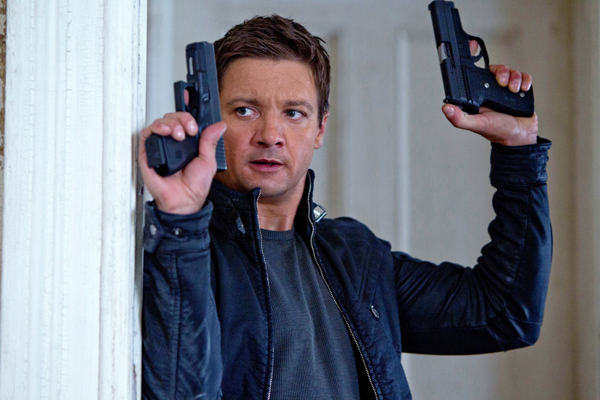 “The Dark Knight Rises’’ has finally fallen out of first-place at the weekend box office.

Jeremy Renner’s action tale “The Bourne Legacy’’ took over as the No. 1 movie with a $40.3 million debut, according to studio estimates Sunday.

Will Ferrell and Zach Galifianakis’ political comedy “The Campaign’’ opened at No. 2 with $27.4 million.

“The Dark Knight Rises’’ had been No. 1 for three straight weekends since debuting amid tragedy when a gunman killed 12 people and wounded 58 at a midnight screening on opening day in Colorado.

Universal’s “The Bourne Legacy’’ casts Renner and Rachel Weisz in an offshoot of the three hits that starred Matt Damon as unstoppable operative Jason Bourne. Renner plays an agent pursued by Bourne’s old spy masters after they try to snuff out the espionage program in a cover-up conspiracy.

“The Bourne Legacy’’ came in well behind the $69.3 million debut of Damon’s last entry in the series, 2007’s “The Bourne Ultimatum.’’ But the new film had a strong start and establishes Renner as a sturdy frontman to keep the franchise running.

“I love the fact that we were able to reboot this and do as well as we were able to. It leaves it open for us to think about it going forward,’’ said Nikki Rocco, Universal’s head of distribution. While Damon is gone, his presence is felt throughout, with characters commenting on Jason Bourne sightings and his former handlers jittery over the fact that the rogue agent is still out there.

Renner is a bankable star to carry on solo, but Universal might really cash in if the studio manages to lure Damon back. “The dream team scenario of a ‘Bourne’ with both Damon and Renner would just be irresistible,’’ said Paul Dergarabedian, box-office analyst for Hollywood.com. “That would be cool. I’d be first in line for that.’’ AP