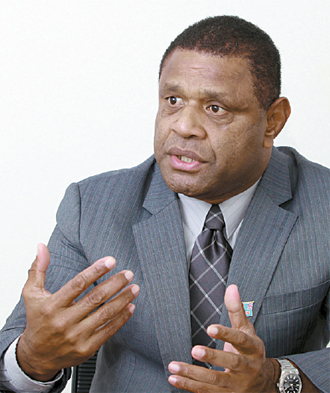 The opening of the new embassy of the Republic of Fiji in Seoul last month came right as the island nation in the South Pacific Ocean was looking into making alliances with Asian countries, said Filimone Kau, ambassador designate of the Fiji Embassy.

“When opening a mission, you have to determine when will be the right time,” Kau said in a recent interview with the Korea JoongAng Daily. Korea and Fiji established diplomatic relations in January 1971. The Fiji Embassy’s first ambassador designate Kau is expected to present his credentials to the Blue House later this month or early September.

“Right now, we’re trying to broaden our diplomatic relations to ensure that we’re engaged with countries that we’ve never really been deeply engaged with before, and we believe it’s the right time to come to Korea to make use of its very good experience in terms of development and growth.”

Fiji has been promoting the so-called “Look North Policy,” which extends its current alliance and diplomatic relations with countries in Asia, and as part of that policy opened its 15th mission in Seoul last month. Before Korea, it opened an embassy in Indonesia, and in September, it will open its 16th mission in the United Arab Emirates. Previously, its embassies were all located in Western cities, including Washington, New York, Brussels and London.

Q. What is the purpose behind opening this embassy?

A. We have had diplomatic relations with Korea for some 40 years now. And now, I think both countries have found the time to be right for Fiji to have a permanent mission in Seoul, Korea, which means it’s now time to deepen the relationship. I’m sure the friendly relations we’ve been having have now become strengthened and that both countries can benefit from exchanges that will happen in every aspect of development.

The Korean Embassy opened its embassy in Suva, Fiji’s capital, in 1980. Why did it take such a long time for the Fiji government to open an embassy here in Seoul?

For Fiji, we are a small country, and when you establish a mission, it’s a lot of money. And you have to determine when will be the right time. Right now, we’ve been promoting the “Look North Policy” in which we’re looking into Asia to extend our friendships and alliances. And we’ve just found it is the right time to come to Korea to make use of Korea’s very good experience in terms of development and also to benefit from Korea’s growth. Also, vice versa, what we can offer to Korea.

Fiji is trying to expand its business and cultural ties with Asian countries. What significance does that have?

Right now, Fiji is very interested to learn about how Korea had developed so rapidly and we see ourselves as a developing country, and we hope to learn some useful lessons from Korea. We’re already partnering with Korea in a lot of areas. In trade, we have been utilizing your industry and commerce sector very well. Now, we’re making use of your motor vehicle industry. Kia Motors and Hyundai Motor are doing very well in Fiji. In terms of other technology, Samsung is expanding its presence in Fiji. From Fiji to Korea, we offer our agricultural commodities and we also have fish and forestry sectors. We’re also looking into the mining sector in the area of deep sea exploration. We’re also trying to deepen our relations and have more exchanges in the cultural sector. There is so much happening in the field of education. University students are coming here, and there is a good number of Korean students who are going to Fiji to attend university and secondary schools, to make use of Fiji’s English-speaking schools. We want to expand further. Hopefully we’ll go into areas like sports. During your winter here, your athletes can play in Fiji. We can extend games Fiji is well known for, in particular, rugby, and others to Korea, and we can learn the same from Korea.

What is the embassy’s plan for this year?

We want to further support Korean Air in getting in more Korean tourists to Fiji and also vice versa, bringing more people of ours to understand Korea. We also want to set up something for Oct. 10th, which is Fiji’s Independence Day.