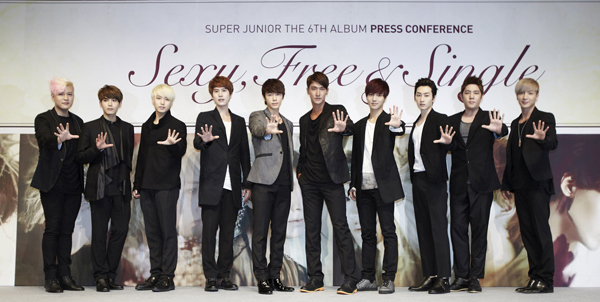 
Super Junior’s sixth album, “Sexy, Free & Single,” has sold more than 335,744 copies since being launched just over a month ago.

According to the music sales ranking organization, Gaon Chart, the album topped the charts for July since being introduced in the second week of the month.

The album took the No. 1 spot in its first week and for three consecutive weeks afterward.

A distant second was Beast followed by 2PM’s Jang Woo-young; the new albums by the two sold 67,845 and 52,618 copies, respectively.

“Sexy, Free & Single” was eagerly anticipated as the return of band member Kangin, who had been out of the public eye serving in the Army for three years.

“Sexy, Free & Single” is expected to exceed those numbers. A repackaged version of the album also went on sale early this month. The updated album includes four new tracks.