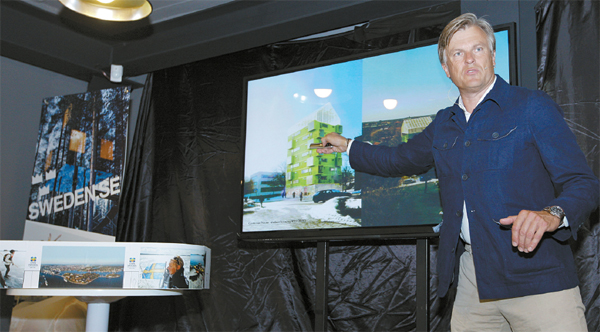 Thomas Sandell, a world-acclaimed architect, explains the “Korean connection” in his container house project. The Swedish Design Day event took place in Sinsa-dong, southern Seoul.Provided by the Embassy of Sweden


Scandinavian design has gained enormous popularity in Korea in recent years and last week the Swedish Embassy provided a rare opportunity to meet world-renowned designers from the Nordic country.

Thomas Sandell, one of the most acclaimed architects from Sweden, visited Seoul and attended the Swedish Design Day event on Wednesday. Lars Bolander, a renowned interior designer and the author of “Scandinavian Design,” also came to Korea for the event. The two designers also visited the Sweden Pavilion at the Yeosu Expo, designed by Sandell, on Thursday.

During the event in Seoul, held at the Scandinavian Design House on Garosugil of Sinsa-dong, southern Seoul, the two designers met with the media and discussed their design philosophies and impressions about Seoul.

Later in the evening, they also gave presentations to the Korean audience, including dozens of design students to introduce their work and Scandinavian design.

Sandell said his inspiration often comes from nature, while functionality and the openness of Sweden also play important parts in his designs. And his design philosophy was used once again for the design of the Swedish Pavillion at the Yeosu Expo under the theme of “Open Sweden ? the archipelago full of ideas.”

“The main idea behind the pavilion was my childhood memories of camping in winter,” Sandell said. “In Sweden, you dig into the snow, lie down in a hole and wait for the sun. And when you look up from there, you see the beautiful sky.”

And the idea was translated into the pavilion, through which he tried to capture the essence of Sweden’s nature within a limited space using a limited budget. Inside the pavilion, vertical wood panels were used on some of the walls to give the feeling of the forest, while some walls were white with layers of rectangles to translate the snow-sculpted walls, he said. The blue floor was intended to give the feeling of the ocean, Sandell said.

“We had the sea, forest, sky, snow and four seasons [in the design of the pavilion],” he said. “Sweden is an open country, and the project fulfilled the ideas of the country. Visitors can feel, touch and smell parts of Sweden.”

Sandell said it was his first visit to Korea, but his impression of Seoul was quite different from what he had expected. “It was a very well-organized and clean city,” he said, explaining that expected Seoul to be more of a chaotic metropolis. “I was surprised to see many green spaces.”

Bolander, a Swedish-born interior decorator based in New York and Palm Beach, Florida, also said he was surprised to see the European influence on Seoul. He said tall skyscrapers could collide with the mountainous landscape of the city, but he was very much inspired by the city’s organized image, particularly its beautiful bridges.

Known for work that combines functionality with aesthetics, Sandell expressed concern about the urban trend of demolishing old buildings and replacing them with new ones. He said a city’s history must be preserved and it is important to add modern touches for a city’s continuous development while keeping its traditional beauty.

During his presentation at the Scandinavian Design House, Sandell presented a series which included many projects that were environmentally friendly and sustainable. The presentation also showed his work that used the existing structures of the city’s historic buildings while adding his design to modernize them.

Sandell concluded his presentation with what he called the “Korean connection.” The architect said he used freight containers to build the student apartments, and many of them came from Korea. “We import a lot from Korea, while we export smaller amounts to Korea,” he said. “So the containers from Korea stayed in Sweden, and I used them for student apartments.”

The project seeks environmentally friendly, cheap and flexible housing for students and Sandell said he was happy to see the Korean connection to Sweden in his design.