Ask random Koreans on the streets of Seoul if they’ve heard of punk band Crying Nut and chances are they’ll be able to name at least a few songs from its long list of hits. But during their North American tour this spring, the country’s best-selling indie rock act performed as if they were nameless newcomers in front of millions of people who had no idea who they were.

The members, however, say they’d do it again in a heartbeat.

“It was so much fun - like a busy Friday night in Hongdae [an area in Seoul known for its underground rock scene] times 100. The streets were brimming with energy,” says Lee Sang-myun, Crying Nut’s guitarist, on playing at South by Southwest, the largest indie music festival in the United States.

The influential five-member band, along with 3rd Line Butterfly, another first-generation indie act here, and rock band Yellow Monsters, toured the U.S. and Canada in March to early April. They performed at some of the biggest music events on the continent, including at the official showcases at South by Southwest (SXSW) in Austin, Texas, and Canadian Music Week (CMW) in Toronto, as well as famous clubs like the Viper Room in Los Angeles and Cafe du Nord in San Francisco.

The bands went not as individual acts but as a group, called Seoulsonic, a project started by Seoul-based music agency DFSB Kollective to introduce Korean indie music to the West.

“If you talk about Hyundai Motor, it is going to be at every major motor show in the world. If you talk about Korean film, they are going to Cannes, Berlin or Toronto. But when it comes to music, Korean music was never represented at any of the music festivals or conferences in the world,” said Bernie Cho, president and strategic planning director of DFSB Kollective.

“And that, to me, was shocking. That’s why we decided that if we are going to promote Korean music, we need to do what other countries are doing.”

Investing money that DFSB Kollective earned through its core business - selling Korean records overseas through iTunes - Seoulsonic started last year by bringing local indie acts Idiotape, Galaxy Express and Vidulgi Ooyoo to the North American stage, concentrating on their official showcases at SXSW and CMW. The company plans to continue the success of previous tours and do another Seoulsonic North American tour next spring, with a new lineup including Goonamguayeo Riding Stella and Lowdown 30, among others. 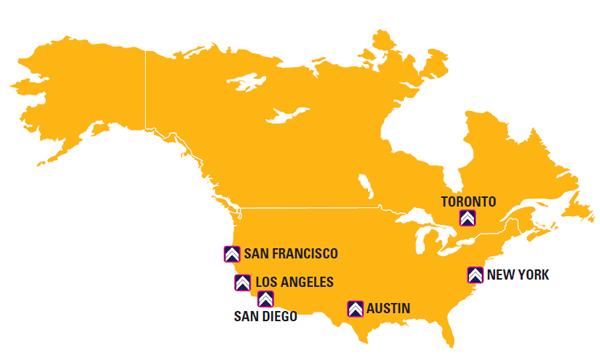 While K-pop idol bands have been basking in the limelight overseas as the second wave of the Korean Wave spreads rapidly, their indie counterparts have been struggling with a flawed music distribution system and subsequent financial difficulties. It was less than two years ago that news of the death of indie musician Lee Jin-won (who went by the stage name Moonlight Nymph) and his financial strife alerted the nation to the structural problems of Korea’s music industry.

“Korea is a very fast-forward market and outsiders were looking into Korea and saying that it may be the future of the digital music industry,” says Cho.

“But although the perception was very rosy, the reality was very thorny because inside Korea, even though it was the fourth largest digital market for music in the world by 2007, everyone was making money except the artists.”

Industry critics have long pointed out the need to restructure the profit distribution system of the local music industry, which is acutely skewed toward major content providers while the creators of the content, the artists, get little in comparison.

Many Korean indie acts have started to look toward foreign markets, specifically Japan and the United States, to release records and get noticed. One of the most popular indie acts locally, Chang Kiha and the Faces, for instance, has released both of their full-length albums in Korea and Japan. Local acts also have begun to venture to major music festivals overseas. This summer, Korean indie band Jaurim will be a headliner at Summer Sonic Festival, one of the most important rock festivals in Japan, alongside Fuji Rock Festival, and a handful of other Korean bands, including Chang Kiha and the Faces and the KOXX, will perform there.

Jung Woo-min, a local indie musician with two full-length albums under her belt, released her first album in Korea while launching her second album in Japan, through Italy-based record label IRMA records, which has offices in Italy and Japan. Along with artists from Italy, Japan, the United States and Sweden, the record label also signed with three Korean artists, including Jung.

“The Korean indie scene can’t compare to the Japanese indie rock scene in either scale or variety,” says Jung.

“Although the industry in Korea has come a long way and there is now a wide array of musicians doing different genres, there is a sense that the scene as a whole hasn’t yet stabilized and is a bit too vulnerable for artists to fully commit to it.”

Top: Seoulsonic musicians at an impromptu street performance during the tour this year. Middle: A concert sign for Seoulsonic bands at the Viper Room in West Hollywood, California, in March. Above: Korean indie musicians during the 2011 tour enjoy some down time. Provided by DFSB Kollective

Although the tours weren’t without a few missteps, the bands that participated say the experience gave them a fuller, global perspective of the music industry that they otherwise would never have known.

“We went on the Seoulsonic tour with a kind of romanticized vision of performing in the U.S. in front of millions of people like we had seen in movies,” says Dguru, a member of electronic rock band Idiotape.

“But after a month of touring, we were quite humbled and realized that it takes much more than a few successful gigs at festivals to make a real impact in North America.

“To [Americans], bands like ours are just an unknown Asian group of guys that are not from Japan or China.”

Lee Sang-myun of Crying Nut says that there isn’t an indie act in Korea that doesn’t have ambitions to go abroad.

“In the past, we’ve even made English demos of our songs so that it would be easier for us to play at festivals abroad,” he says.

“We’ve performed at festivals in Japan and the U.S., but the more we go to these venues, the more we realize that it is really difficult to break through outside of Korea, whether it’s the language barrier or just getting across our music and our identity to people.”

Crying Nut members say this anonymity in North America fueled them to give 100 percent in every performance, something they admit is sometimes hard to do in Korea after 14 years of being active in the scene.

“We performed at this 100-year-old building for our official showcase at SXSW. We really gave our all and during the performance, because the audience was jumping so much, the top floor cracked and the building almost collapsed,” said Lee.

Regardless, the bands both agree that the music and performance level of Korean bands are up to those from the U.S., if not higher.

“It was shocking for me this time in the U.S., to see how the Korean bands playing at SXSW and CMW were so advanced. The bands were really strong live and compared to them, the American and Canadian bands were lagging behind in my opinion,” says Dguru.

“Watching all these bands in North America, I thought if Korean bands can do so well under the financially poor, weak structure of the Korean indie scene, who knows what we can do when the scene is as stable as the American indie scene is now?” says DR, drummer for Idiotape.