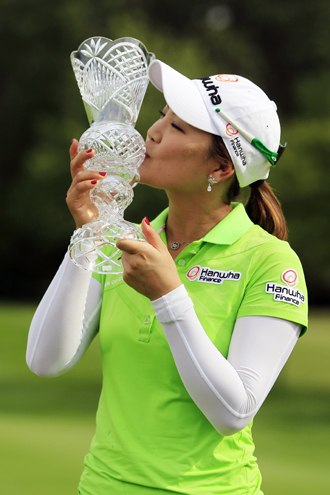 SYLVANIA, Ohio - Even though it had only been a little over a year since her victory in the U.S. Women’s Open, Ryu So-yeon was already feeling the pressure to win again.

She lapped the field to end the drought Sunday. Ryu rode a string of six straight birdies in the middle of her round to a nine-under 62 and a seven-stroke victory in the Jamie Farr Toledo Classic.

Ryu began the day locked in a four-player logjam - all Koreans - for first place. She took the lead by herself for the first time with an 8-foot birdie putt on the third hole and gradually stretched her advantage until pulling away with birdies on numbers nine through 14.

“On the ninth hole, I made a really long putt and my confidence level went up,’’ she said.

Still, a good friend had provided a cautionary tale. Son Yeon-jae, competing for South Korea in rhythmic gymnastics at the London Olympics, was in line to medal heading into the final day of competition. But, she told Ryu by phone, she had gotten ahead of herself and ended up missing out on a trip to the podium. Ryu took that to heart on the course.

“It made me nervous because I really wanted to win .?.?. She helped a lot,’’ Ryu said about the message imparted by her friend. ‘’I didn’t want to be thinking of winning.’’

Ryu ended up at 20-under 264 thanks to the best final round by a Farr winner - by three strokes. On the third hole, she hit her approach from the light rough to 8 feet over the flag and made the birdie putt to break free of the pack. She added a 12-footer for birdie at the par-4 fifth to double her lead.

The lead could have grown more; Ryu missed birdie putts of 8, 6 and 10 feet at numbers four, six and seven. Then, after Kim In-kyung, who shot a 71 and ended up tied for fifth with Jennie Lee (67) at 11 under, narrowed her lead to a shot, Ryu rolled in a 30-footer on the ninth hole. None of her next five birdies was outside 6 feet.

For good measure, she birdied the last hole - a kick-in from 2 feet - to cap her round. AP