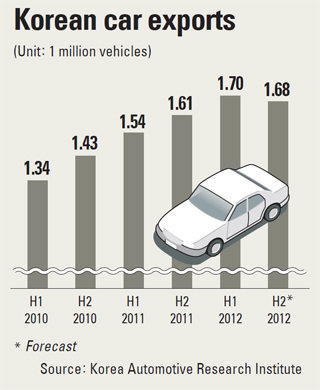 Korea’s automobile industry will likely face a tough time in the second half of the year as low demand from Europe and increased competition from foreign carmakers are causing sluggish car exports, while labor union strikes are also affecting local automakers.

According to a report released by the Korea Automotive Research Institute (Kari) last Wednesday, Korea is expected to export 1.68 million vehicles in the second half of the year, up 4.3 percent from a year earlier.

However, the figure is slightly lower than in the first six months of the year, when outbound shipments stood at 1.7 million vehicles.

The report predicted that global demand for cars will grow just 4.3 percent on-year to 38.7 million vehicles in the second half of the year, slowing from first-half growth of 7.2 percent.

Demand from countries within the European Union will decrease 0.7 percent on-year, it said.

Along with shrinking demand, Kari said global trade barriers will dampen Korean automakers’ sales for the remainder of the year.

The EU is currently examining France’s request for steeped up surveillance of Korean car imports as these are seen as threatening its domestic players, and Brazil announced it will raise taxes on imported cars by 30 percent.

In contrast, Hyundai Motor and Kia Motors suffered setbacks recently in the United States as their combined share fell for the second straight month. In the first half of the year, exports of cars and auto parts accounted for 13.3 percent of the country’s total exports, Kari said.

“Retreating exports are likely to shrink companies’ investments and further put the brakes on the domestic economy,” said the report.

Labor union strikes are further adding to the industry’s woes.

Many factory workers returned from their summer vacations recently only to lay down their tools as they push their demand for higher wages and improved work shifts.

The unions of Hyundai, Kia and GM Korea all went on strike beginning last week. They also staged strikes on July 13 and July 20 by joining a larger walkout organized by the Korean Metal Workers’ Union.

Despite ongoing talks with management, workers at Hyundai went on strike for two hours last Wednesday and another three hours on Thursday, followed by a four-hour strike on Friday.

They staged another four-hour strike yesterday and are scheduled to do so again today as well as on Friday. Kia’s union followed suit last Friday and is set to team up with Hyundai’s striking workers again this Friday.

GM Korea’s union also launched two four-hour strikes last Wednesday and Thursday. It was reported that not only factory workers, but also office workers participated in the strikes.

Sources say that because the nation’s third-largest automaker has been receiving voluntary retirement applications from senior managers, this may have caused friction among office workers within the company.

Hyundai estimated that lost production totaled 6,500 vehicles due to the strike on Wednesday and Thursday.

The estimated damage from July’s strike, which saw inventory drop by 14,000 vehicles, was 290 billion won ($239 million). Hyundai Motor said management and labor began intensive negotiations yesterday as the former is expected to make a final offer this week.