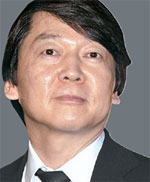 Ahn Cheol-soo’s ambitious plan to operate a charity foundation bearing his name hit a roadblock yesterday as the nation’s election watchdog warned such a move would violate election law.

“Because the foundation’s title includes the name of a potential presidential candidate, offering financial support under its name is in violation of election law,” the National Election Commission announced yesterday.

According to the commission, Item 2 in Clause 2 of Article 112 of the Public Official Election Act was used as the grounds for its conclusion. Under the act, a candidate is allowed to engage in legitimate charity work through a foundation only if it is established at least four years before election day.

To avoid the legal issues, the commission said Ahn could remove his name from the foundation’s title and refrain from participating in its management. The charity would only be permitted to provide donations via means that could not be linked to Ahn.

Though Ahn has not declared his presidential ambitions, speculations have run high that he will run in the December election.

Political observers said that the Ahn Cheol-soo Foundation could play an important role in boosting the budding political star’s reputation in support of his presidential bid. But the election commission’s conclusion appears to have put a damper on the plan.

The software entrepreneur announced in November that he would donate half of his shares of AhnLab, worth about 150 billion won ($133 million) at the time, to help educate children of low-income families.

If the foundation changes its name to comply with the election commission’s ruling, this would become a de facto admission that Ahn will run in the presidential election. Ahn has tried to keep his presidential ambitions under wraps, and he wrote in his latest book, published last month, that he was thinking deeply about his possible participation in politics.

Kang In-cheol, a lawyer representing the Ahn Cheol-soo Foundation, said that Ahn has not been involved in the direct operation of the charity.

“We will review the legal details and decide our position,” Kang added.