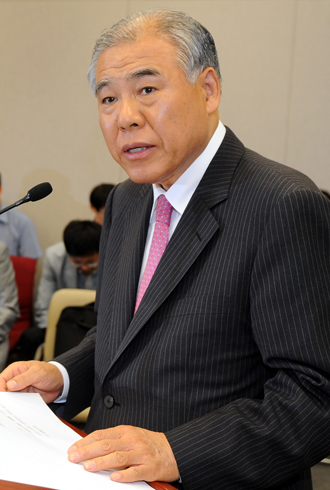 After weeks of deliberation, controversy-ridden Hyun Byung-chul was appointed yesterday by President Lee Myung-bak to helm the National Human Rights Commission for a second term despite criticism from both ruling and opposing parties.

“It took time to check the truth of the issues raised from all directions,” said Park Jeong-ha, presidential spokesman, yesterday. “There are parts that are different from the facts, and there are allegations submitted that were determined to not have a big impact on his duties, therefore Chairman Hyun’s appointment has been approved.”

When Hyun, 68, was named by Lee for another three-year term nomination on June 11, he was showered with allegations of plagiarism of academic papers, engaging in real estate speculation and allowing his son to dodge military duty by getting fat.

On July 16, Hyun appeared in a confirmation hearing in front of the National Assembly, during which he denied most of the allegations where he was grilled by both parties regarding his ethical standards.

The main opposing Democratic United Party adamantly responded that it “definitely can not recognize” the appointment of Hyun at a press conference at the National Assembly yesterday.

Park Jie-won, a DUP spokeman, added, “We strongly denounce the enforcement of Mr. Hyun Byun-chul’s appointment and will mobilize every method we have to retract the appointment which has brought about a regression in Korea’s human rights.”

At the press conference, DUP Representative Jung Sung-ho further stated, “President Lee finally pushed forward Chairman Hyun’s appointment, but I can only see it as an ‘obstinate farewell’ indicating he wants to fight against people.”

With half a year of his presidential term remaining, Blue House insiders indicate that it will be too much of a hassle for President Lee to find another appointee, a process which can take several more months.

Hyun, who is a Hanyang University law professor and formerly president of the Hanyang Cyber University, was also met with criticism upon his first appointment as chairman to the commission in July 2009 because of his lack of experience in the field of human rights.

“Our party recommended the popular opinions of politicians and citizens be gathered regarding this issue,” he added. “We wish that Chairman Hyun will strive toward protection of human rights to quell the critical public sentiment toward him.”