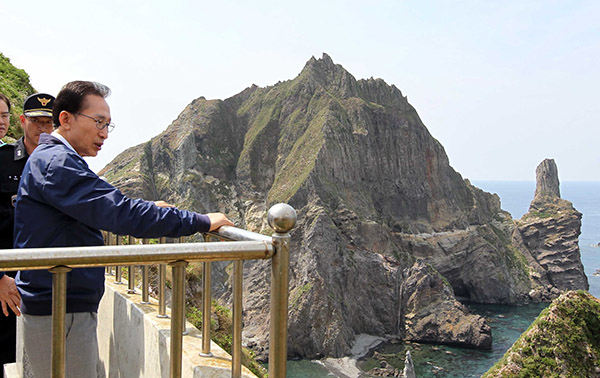 President Lee Myung-bak said yesterday he took the action to make an unprecedented presidential trip to Dokdo last week to confront Japan’s reluctance to redress the long-standing grievances over its wartime crimes against Korea.

“Some said Dokdo is undeniably Korean territory and it was unnecessary for me to actually go there,” Lee was quoted as saying by his spokesman, Park Jeong-ha.

“Japan is a big country and it can make up its mind and resolve [pending historical] issues. But it was reluctant to do so because of its domestic political situation, and I felt the need to take action.”

Lee also said Japan’s influence in the international community has dwindled from what it used to be in the past, according to Park.

Lee made the remarks during his luncheon with the new leadership of the National Assembly. Speaker Kang Chang-hee and deputy speakers as well as senior presidential aides joined the meeting.

According to Park, Lee told the leaders of the legislature that he had initially prepared for the trip to Dokdo three years ago.

“And I also planned to visit the islets with a plaque bearing the name of Dokdo engraved on it last year, but the trip didn’t take place due to the weather conditions,” Lee said.

In a symbolic trip no other president has made, Lee visited Dokdo, Korea’s easternmost islets, on Friday.

Although the Blue House said it was a part of Lee’s environmental preservation campaign, the unprecedented presidential trip to the islets, located 87.4 kilometers (54 miles) southeast of Ulleung Island, is considered an effort to send a message to reaffirm Korea’s sovereignty over its easternmost territory, over which Japan has frequently claimed control.

Lee said yesterday he originally planned a weekend trip to spend a night on Dokdo, but the weather only allowed him to stay there for a few hours on Friday.

“And Japan’s response is not different from expected,” Lee said.

Japan lodged a series of angry complaints over Lee’s trip, and the diplomatic ties between Seoul and Tokyo quickly became strained.

Lee’s latest remarks are expected to further freeze the relationship, which was already icy due to issues related to Japan’s wartime crimes such as sex slavery of Korean women.

“In December last year in Kyoto, I spent more than one hour trying to persuade [Japanese Prime Minister Yoshihiko Noda] who demanded the statue of a teenage girl be removed,” Lee said, expressing his frustration toward Japan’s attitude.

The statue, called the Peace Monument, was erected last year in front of the Japanese Embassy in Seoul and Tokyo has demanded it be removed.

In a dinner meeting on Friday after his visit to Dokdo, Lee contrasted Japan’s attitude with that of Germany, a senior Blue House official was quoted as saying by Yonhap News Agency.

“I have no intention to provoke Japan or create a standoff,” Lee was quoted as saying, “but Japan has been too insincere about the issues.”

While some showed concerns about the diplomatic fallout with Japan over Lee’s Dokdo visit, the Korean public largely supported it, a survey conducted by the government showed.

The office of Lee’s senior secretary for political affairs conducted a poll on Saturday, and 84.7 percent gave positive responses to the visit.

Although the diplomatic row between the two countries worsened at a sensitive time ahead of next week’s celebration of Korea’s emancipation from Japan’s colonial rule, President Lee’s Liberation Day address will unlikely include another harsh message toward Tokyo, a senior presidential aide said.

“The Liberation Day address has not been finalized,” he said. “But it won’t likely include another strong message about Dokdo.”

The source, however, said the president will still talk about the historical issues between Korea and Japan.

In March, Lee implored Japan to redress its wartime sexual enslavement of Korean women, warning that time is running out for Tokyo.