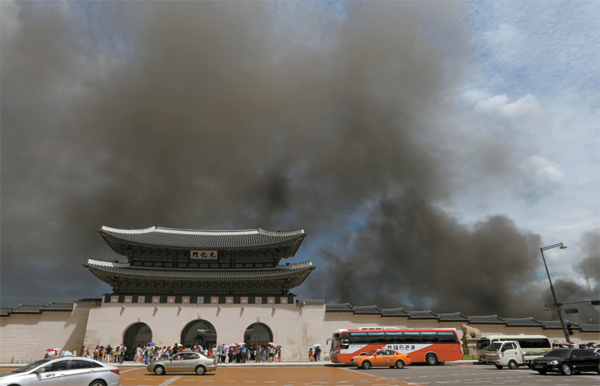 
A fire at a construction site for an art museum in Jongno District, central Seoul, yesterday, claimed the lives of four construction workers and left more than 20 injured.

A plume of black smoke rose high in the city at around 11:20 a.m. from the construction site for the Seoul branch of the National Museum of Contemporary Art. The smoke caused nearby citizens to panic, thinking it was another incident similar to the Namdaemun fire in February 2008.

The construction site is located directly next to Gyeongbok Palace in central Seoul, and the scene of black smoke rising as high as 100 meters (325 feet) caused a flurry of calls from citizens to the fire department. The cloud covered the Sejongno area, engulfing a cluster of government buildings in smoke. The fire broke out from the third basement of the construction site and soon engulfed the whole basement in smoke within three minutes, according to a witness account of a rescued worker.

“We heard a series of explosions on our way out of the basement,” the rescued worker was quoted as saying by Yonhap News Agency.

The fire department suspects combustible materials such as urethane that were in the third basement floor caused the flames. Those materials are used for insulation work, a fire official said.

Firefighters put out the blaze at around 12:40 p.m., 80 minutes after it had begun. The four workers died from inhaling toxic fumes, according to the fire department. 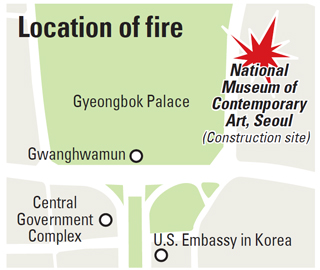 A lack of a ventilation in the basement construction site is believed to have caused casualties as all of the four victims who lost their lives were working in the third-floor basement.

“Workers might have been doing both insulation work involving combustible urethane and welding activities, which led to the blaze,” said Yun Yong-kyun, professor of the department of fire and disaster prevention of Semyung University in North Chungcheong. “It is a practice that should be avoided, but some keep the habit to complete the construction on schedule.”

Another worker is in critical condition from falling from a 20-meter-high crane during the fire. The Jongno Fire Station reported a total of 24 workers were brought to hospitals in the city, and 14 of them were discharged later in the day.

Fire authorities rolled out over 30 fire trucks and 160 firefighters to extinguish the blaze, but struggled to bring the situation under control as toxic gases filled the basement area which was larger than 31,000 square meters combined.

No casualties from tourists or residents were reported as they were promptly evacuated.

The second and third basement suspected to be responsible for the fire was under construction to be made into parking lots. The construction that began in January was intended to build a three-story building with a three-story basement for a Seoul branch of the contemporary art museum and is slated to be completed by Dec. 31 this year by GS Engineering and Construction.

Police and fire authorities are set to jointly look into the exact cause and closely examine any violation of safety regulations.

The Ministry of Culture, Sports and Tourism has set up an emergency support headquarters to effectively control and minimize the fallout from the incident.

“We will make a determination on whether to delay the completion date for the construction, originally scheduled for the end of the year, once results of thorough safety assessments come out later,” said the ministry.