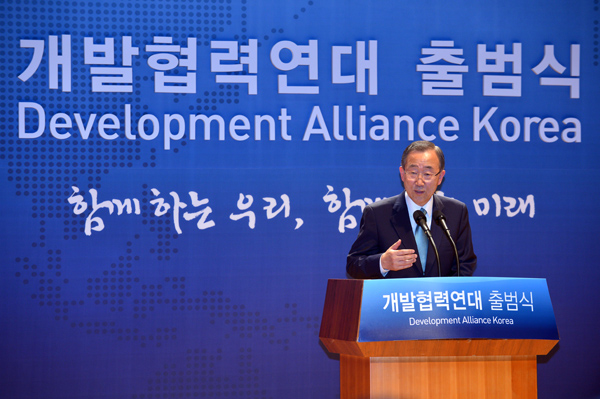 UN Secretary General Ban Ki-moon speaks during a ceremony to launch the “Development Alliance Korea,” a coalition of local civic groups to promote overseas development aid, at the Ministry of Foreign Affairs in Seoul yesterday. [YONHAP]


Korea launched its first coalition of government and private entities to strengthen its cooperative network in the field of overseas development aid, Ministry of Foreign Affairs said yesterday.

United Nations Secretary General Ban Ki-moon and Foreign Minister Kim Sung-hwan were among the attendees at the inauguration ceremony held in the morning.

The establishment of the so-called “Development Alliance Korea” was led by the Foreign Ministry and seven agencies including the Korea International Cooperation Agency and the Federation of Korean Industries with some 80 private entities, including civic groups, private firms and academies. The coalition’s aim is to officially and actively take part in eradicating poverty and reducing inequality in the international society.

“We need a strong supporter like Korea for the UN to achieve its [sustainable development] goals,” UN Secretary General Ban said in his congratulatory remarks during the inauguration ceremony. “What I’ve learned as UN secretary general is that even a good [government] policy cannot be well promoted and implemented without the consultation of others, including civic groups.”

Ban added that one of the major tasks for the coalition is to create a strong trilateral partnership among the government, companies and civil societies in facing serious global challenges.

Members of the coalition plan to hold the first forum in mid-September and discuss ways to contribute to international aid. They will hold two regular meetings per year and hold additional meetings if needed to implement what they have discussed.

Foreign Minister Kim also said, “The alliance will become a creative body by integrating the capacity of each of the three entities” and “it will also seek partnership with foreign countries including the United States, Japan and those in Europe, and also international bodies including the UN, to contribute to ending poverty and achieving sustainable development.”