Stamina-boosting eels are getting pricier by the day

Stamina-boosting eels are getting pricier by the day 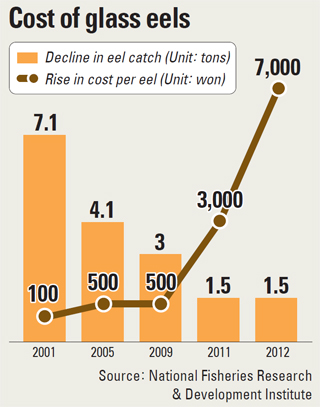 Eel is considered both nutritional and stamina-providing - but high prices have sent eel connoisseurs reeling.

Kim Kwang-ho, 35, expressed his surprise that the cost of freshwater eels was 80,000 won per kilogram ($32 per pound) on a visit to an eel specialty restaurant in Incheon on Friday.

The owner of the restaurant, 60-year-old Shin Un-ho said, “The cost of wholesale eel prices was 32,000 won per kilogram last year and rose recently to 55,000 won this year. It’s difficult to even get Chinese eel.”

Another eel restaurant owner Oh Min-seong, 41, said, “It’s difficult to buy freshwater eel. Out of more than 100 eel restaurants, sales decreased compared to last year by 40 percent. And it looks like it will be even more difficult next year.”

In 2009, freshwater glass eel, also called elver, which are young eels that are slender, translucent and weigh less than 0.2 grams, cost 500 won per eel. The price increased sixfold to 3,000 won last year. This year, it costs around 7,000 won. They are as pricey as Korean yellow croaker, or jogi, a delicacy fish that costs 7,900 per fish according to August market rates.

The hike in price reflects a shortage in supply. About a decade ago, 7-10 tons of these glass eels could be caught, but last year only 1.5 tons were caught.

Glass eels are imported from the United States and the Philippines as well, according to the National Federation of Fisheries Cooperatives, but not enough to meet the demand, and they foresee a full-blown “eel crisis” at this rate next year. Raising eels from when they hatch until they grow into adulthood is not possible. In the case of the glass eels, first they are caught in the wild, and then they have to be farmed for at least six months. And out of 520 fish farms in the nation, only 50 places harvest these glass eels.

Japan, China and Taiwan are also rampant consumers of eels and are facing a similar decline. The eel market in Korea alone is worth 2 trillion won and 20 trillion won in Asia.

In 1963, Japan consumed as much as 232 tons of glass eels, which rapidly decreased to 6 tons by 2010. An eel specialty restaurant which operated for a century in Japan closed down because of the eel crisis.

Reasons for the eel shortage include overfishing and global warming. Another main reason in Korea is the destruction of the eels’ natural habitat. Estuary dams built to expand Korean fisheries and agriculture since the 1970s have also blocked eels from migrating to freshwater.

Glass eels grow to maturity for some six years in freshwater but when it is time to breed, they migrate 3,000 kilometers (1,864 miles) back to the saltwater, spawn and then die. They only spawn once in a lifetime. But such dams prevent their migration.

According to the Korea Rural Community Corporation, out of the 4,155 waterways across the nation, just 541 can allow fish to pass through.

Other environmentalists criticize the controversy-ridden Lee administration’s four-rivers restoration project, which involved dredging of areas where freshwater and saltwater meet. They said that this contributed to the destruction of the habitat of eels and other fish.

“The eel crisis is nature’s response to people’s destruction of the environment for the sake of large-scale development,” said Hwang Sun-do, a researcher with the Korea Fisheries Resources Agency, “and is just a prelude to what awaits in the future.”

The U.S. Fish and Wildlife Service has over the past several years received petitions to review if the eel may need federal protection as a threatened or endangered species.

Eels are on the watchlist of the Convention on International Trade in Endangered Species. Different species of eels are also on Greenpeace International’s seafood red list, which requires urgent action on the fish listed.

“It’s a pity that the whole world has been in discussion in order to prevent the extinction of glass eels, but only we have been ambivalent,” Hwang said.