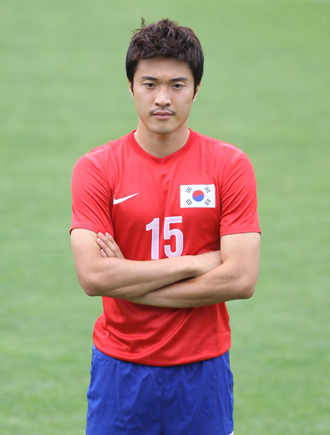 Korea’s football governing body said yesterday it has sent an e-mail to its Japanese counterpart to explain the behavior of the local football player who displayed a controversial political sign after a win against Japan in the London Olympics.

After Korea beat Japan 2-0 on Saturday to clinch the bronze, midfielder Park Jong-woo carried a sign that read, “Dokdo Is Our Land,” referring to Korea’s easternmost islets that Japan has long claimed as its own.

“We explained that Park brandishing the slogan did not carry any political intentions, and was not a premeditated action,” Kim said.

Following the game, the International Olympic Committee barred Park from taking part in the medal ceremony, saying that political statements by athletes are prohibited in Olympic games.

The IOC has asked the global football governing body FIFA to discipline Park, and said it may decide on further sanctions later and would withhold the bronze medal until the case is reviewed by FIFA.

The ceremony took place hours after President Lee Myung-bak made an unprecedented visit to Dokdo, a move that further raised diplomatic tensions between the two countries.

Meanwhile, Japanese media on Tuesday said that the JFA had received an “apologetic” e-mail from the KFA.

However, Kim said “the e-mail was sent to explain that Park’s acts were not intentional and the word ‘apology’ was not inside the mail.”

The KFA has insisted that Park had acted “in the heat of the moment” and said Park seized the sign from a fan, stressing that the incident had not been pre-planned.

The KFA said it is preparing data to back up such claim, to be handed to FIFA sometime before Thursday.