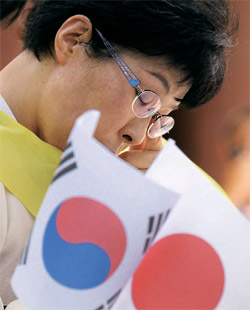 An eye-catching picture ran in this morning’s newspapers. In the picture, a group of middle-aged women wearing hanbok and kimonos - Korea’s and Japan’s iconic attire - held a humble demonstration wearing bands inscribed with “We apologize” around their shoulders. Most of them married Korean men and are members of an association established to overcome the two countries’ strained history and promote friendship. A total of 1,200 Japanese women participated in the event at 13 locations across the country, including Seoul Plaza, where 500 gathered.

After President Lee Myung-bak’s surprise visit to Dokdo, Korea-Japan relations have irrevocably turned sour. And Lee’s insistence that Japan should apologize for its wrongdoings at the height of its imperial days does not show any sign of mitigation. He expressed an intention to accept the Japanese emperor’s wish to visit Korea on the condition he sincerely pays tribute to our deceased independence fighters. Meanwhile, several right-wing members of the Japanese cabinet vow to pay respect at the Yasukuni Shrine to protest Lee’s visit to Dokdo even by overriding the prime minister’s objection that the idea amounts to a further escalation of deep-rooted grudge and hostility.

Kazue Isagawa, who organized the event as head of the association, said, “We have long been concerned about the never-ending enmity between our children’s parents’ countries. We agonized over how to teach our history to our kids and we decided to take action to change it.” As the most shocking history for them after coming to Korea was about the “comfort women,” or sex slaves during the World War II, they determined to hold up a sign that reads: “We apologize for the comfort women issue.” They also said they urge the Japanese government to make an apology for what it did in the past.

Most participants in the demonstration retain Japanese citizenship, while their husbands have Korean citizenship and their children dual. Even through it may not be an extraordinary family composition in a global era, the uncomfortable relationship between the countries can pose a serious problem for them. That’s why demonstrators have urged both Seoul and Tokyo to march toward peace based on mutual trust and recognize their greater mission as partners to enhance peace in Asia and the world. Both countries should mull what their actions mean on our Liberation Day.