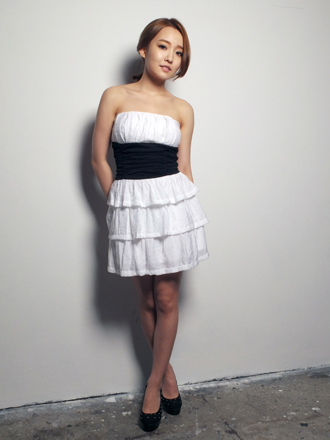 Singer Younha rose to fame in Japan and is now a sensation in Korea. She is the youngest star to feature in the popular show “I Am a Singer.”[JoongAng Ilbo]

It had become an all-too-familiar narrative. Younha would sing during an audition, only to hear that she wasn’t pretty enough to become a star. At 16 years of age, she was fed up with the process in Korea and moved to Japan.

There, her talents were recognized as she shot to fame, becoming a part of the growing Hallyu, or Korean Wave. The singer would then return to Korea in 2007, where she released her debut Korean album “The Perfect Day to Say I Love You.” The record topped charts on the week of its release.

Younha has made a name for herself as an exception in the Korean music scene. While most entertainers work with major agencies and incorporate dances in their performances, Younha has been carried by her raw singing talent.

She has collaborated with some of the most popular singers in Korea, such as Im Jae-bum and Kim Bum-su, and continues to enjoy success in both Korea and Japan. But a recent legal conflict threatened to derail her meteoric rise.

Younha sued her agency for infringing on her rights and keeping an unfair share of profits.

“For a while, I shut myself in, first at home and then at the studio. During the ‘out-of-job’ period, my mother scolded me all day. I felt like I was 16 again,” she said in a recent interview with the JoongAng Ilbo.

“It was painful at the time. I even thought I’d never be able to trust anyone again and could barely do anything.”

After the dispute was settled in February, she contracted with a new management company and released her fourth album, “Supersonic,” which came one year and eight months after her previous LP.

“Working as a DJ for the MBC radio program ‘Starry Night’ inspired me to pick up my career again,” Younha said.

“Watching other singers promote their new albums and appear totally worn out at dawn, I envied them for being tired. It propelled me to start again. Some people worried and wanted to stop me, but I was eager to throw myself into everything I could at the moment.”

The new album “Supersonic” was recorded with particular care and affection, Younha said. She matched every melody with her voice to see if it would work well.

“I realized singing is my calling in life during the resting period. I no longer covet for one-shot success or topping the charts.”

In her newest album, the singer sings one track, “Would We Have Changed,” with “Superstar K2” runner-up John Park.

“John and I are the same age, and we easily became friends. When I asked for a duet, I was expecting a willing ‘yes,’ so it was kind of embarrassing when he said he needed his management’s permission. Still, I was satisfied with the results, and I wanted to give him something in return, which I haven’t done yet,” she said.

Younha has also been named the youngest competitor on “I Am a Singer,” a singing competition program that features top singers in Korea.

“I will do my best to brighten this already marvelous stage and move the audiences’ hearts,” she said.