‘Social-tainers’ are talking about the issues

‘Social-tainers’ are talking about the issues 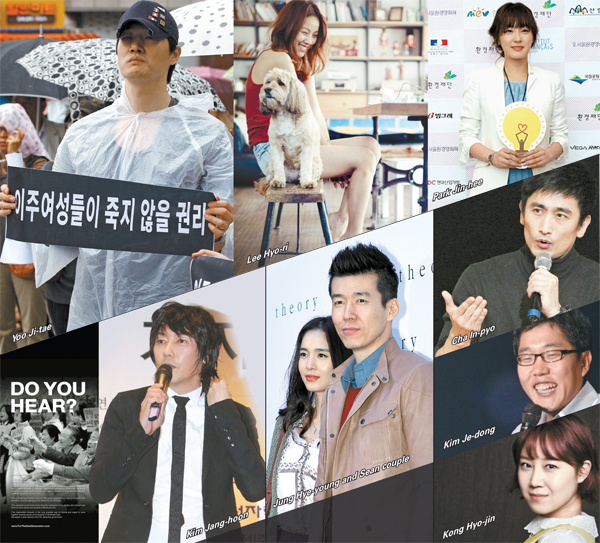 In the middle of last month, those who passed by Daehanmun, the main gate of Deoksu Palace in central Seoul, walked by actor Yoo Ji-tae. He wasn’t in the middle of a shoot or signing autographs at a fan-meet. Rather, he stood there silently in the heavy rain holding up a sign that read “Immigrant women have the right to live.”

He was participating in a campaign against the domestic violence that has taken place between Korean men and their migrant wives. Two women were killed by their husbands in early July.

“I hope they are the last victims,” Yoo said to reporters at the site of his protest. “I’m so ashamed as a Korean man.” He added that he is preparing to direct a film about the issue.

Celebrities in Korea are increasingly raising their voices on social issues, from domestic concerns like the abuse of migrant wives to international disputes like Korea’s sovereignty over the Dokdo islets. The trend has led to the use of the term “Social-tainer,” a portmanteau of “social” and “entertainer” that refers to stars who act and comment on the issues.

While the idea of celebrities involving themselves in politics or social movements is familiar to many in the West, it is a relatively new phenomenon in the Korean entertainment industry.

Yoo is an outspoken exemplification of this trend. He has been volunteering in Africa and says he has always wanted to be a social worker. He recently promoted the adoption of abandoned dogs on his Twitter account.

Actress Park Jin-hee is also participating in many environmental campaigns. She is now honorary ambassador of the NGO Korea Green Foundation. Cha In-pyo and Shin Ae-ra have taken on a different cause, promoting the rights of North Korean defectors.

It is no exaggeration to say that singer Sean, together with his actor wife Jung Hye-yeong, is almost a full-time social worker. He is currently holding a fund-raiser for building a rehabilitation hospital for disabled children.

Books have been a primary medium for social-tainers to get their voices heard. So far, books published by celebrities have mainly been autobiographies or professional analyses of fashion, makeup and diet trends. Nowadays, celebrities are writing books about their opinions on social issues.

Lee Hyo-ri’s essay on animal welfare, “Closer,” has sold over 30,000 copies since its May release. Even Park Won-soon, mayor of Seoul, commented on the book, saying he’s planning on establishing a new department regarding animal welfare later this year.

Gong Hyo-jin also published an essay, “Notebook,” listing small tips on how to save the environment, such as using shower gels sparingly, reusing Ziplock bags and unplugging electronics. It has sold over 40,000 copies.

“Both of them hoped their social influence would be used in a good way, making a difference. Their deep considerations and studies on the related fields were very impressive,” said Kim Su-jin, the director of the publisher Bookhouse who planned both celebrities’ books.

Social networking services have played a major role in the celebrities’ social participation. Kim Yeo-jin, Kim Je-dong and Kim Mi-wwa began voicing their opinions on issues through Twitter. Other stars such as Lee Hyo-ri and Yoo Ji-tae also actively tweet, proving celebrities are no longer afraid of directly communicating with the public.

Jang Duk-jin, professor of Seoul National University’s College of Social Sciences, even predicted that the ability to communicate with the public through SNS will also be counted as a qualification of top stars in the future, as much as appearance and talent.

The transformation in the public’s view of celebrities could be the primary contributor to these social participation trends.

“The originally vertical relationship between stars and the public has become horizontal,” said Jung Duk-hyun, a popular-culture critic. “Celebrities, who were once just an object of envy, are now seen as another member of society.”

Hyun Taek-soo, professor of Korea University’s College of Social Sciences, said that as corporate social responsibility is required of companies, the same principle is increasingly being applied to celebrities.

The effects have been positive for society as well as the celebrities’ image. Choi Soo-jong and Ha Hee-ra’s pledge to donate their body tissues after death is a good example. Unlike organ donation, tissue donation is lesser known to the public, but right after the couple’s announcement, donations skyrocketed in less than two weeks.

However, many people still doubt the authenticity of social-tainers and view their actions as part of a planned promotional strategy. Celebrities often try to raise their reputations through social participation and donations. Some stars don’t assume great prominence in their regular field (singing or acting) but gain popularity through volunteer work, earning roles in films and commercials.

“It requires a lot of willpower and devotion to be an active social-tainer in the long term. Uninterested stars, reluctantly participating, rarely make it to the end,” said Lee Hyun-woo, the PR manager of Unicef.

Critical voices are particularly aimed at the celebrities who are widely expressing their political opinions. “Entertainment is a field appealing to emotional sides of people. By interfering in politically sensitive issues or supporting particular political parties, stars might elicit an emotionalization of politics,” said Shin Yool, professor at Myongji University.

Revealing political colors often backfires on celebrities, which explains why most celebrities’ participation remains in social areas related to universal values such as environmental, children, animal and human rights.

“American celebrities usually don’t get in trouble for revealing their political colors,” said Lee Dong-yeon, professor at Korea National University of Arts. “No one being criticized or disadvantaged for their personal opinions is a sign of a mature society,”

Criticisms exist, but most people consider social-tainers’ movements to be positive. “Celebrities expand the social issues from originally confined political ones to various questions we have to solve, contributing to an advance towards pluralism in the society,” said Kim Hyung-joon, professor of political science and diplomacy at Myongji University.