Resume reunions before it’s too late

Resume reunions before it’s too late 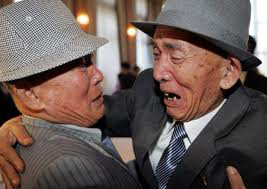 On the evening of Aug. 10, North Korea’s state-run broadcaster announced that Seoul had signaled its intent to resume family reunions two days earlier and made demands that were hard to accept.

On Aug. 8, Seoul proposed a working-level Red Cross contact on Aug. 17 in Gaeseong or Munsan through a telephone communication via a Panmunjeom liaison. With no previous communication, the ball was in the North’s court. But rejection was expected, since Pyongyang had demanded the lifting of the May 24 sanctions and resumption of Mount Kumgang tourism as preconditions for any reunion.

North Korea was certainly reluctant to resume the reunion meetings, but Seoul also contributed to the rupture by not handling the issue properly. Considering Pyongyang’s antagonism toward the Lee Myung-bak administration and the ardent wishes to reunite with separated family members, a reunion should have been approached carefully and strategically. However, the government made a sudden proposal knowing full well it would be rejected, expressing regret for linking a reunion with other issues.

The separated families are frustrated by the attitude of the Ministry of Unification, which they say lacks both a plan and the will to make a reunion possible. Minister Yu Woo-ik and the ministry are focusing on the Unification Jar to save up 55 trillion won ($48.68 billion) to finance unification in 20 years.

That will be too late for many. Of the 128,000 people who applied for the reunions, more than 51,500 have died, and 79 percent of those remaining are age 70 or older. As the meetings are delayed, they are growing more desperate.

There had been two reunion meetings each year since the first inter-Korean summit in 2000. But the meetings have been suspended since Pyongyang attacked Yeonpyeong Island in November 2010. Since the Lee administration has been especially strict on humanitarian assistance, Pyongyang may be stalling on the reunion issue in protest.

However, the true strategy should be to bring Pyongyang to the negotiation table even if it is not willing to associate with the South. If the president really cares about the people who have been separated from their loved ones and are growing old, he has no reason not to make a progressive and meaningful proposal for family reunions in his Liberation Day address. It may be a good idea to send a special envoy to resolve the issue. He should not give up because his term is nearing its end. If his presidency were a 90-minute soccer match, he would have about 10 minutes to play. Half-hearted approaches will accomplish nothing.

The author is a deputy political news editor.