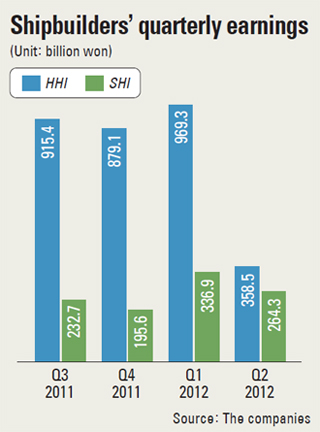 Hyundai Heavy Industries (HHI), the world’s No. 1 shipbuilder, said on Monday it posted 13.7 trillion won ($12 billion) in sales and 358.5 billion won in operating profit on a consolidated basis for the three-month period. Even though sales inched up 2.3 percent on-year, operating profit plummeted 65.2 percent. Net profit was 134.1 billion won, down 83 percent.

“Q2 sales edged up owing to increases in offshore facility construction and oil production, but the operating and net profits plunged due to falling profits in the shipbuilding unit,” said an employee at HHI.

Refiner Hyundai Oilbank, an HHI subsidiary, fell into the red due to low international oil prices during the first half, the group said.

Samsung Heavy Industries (SHI) announced its Q2 performance on the same day. The nation’s second-largest shipbuilder recorded 3.35 trillion won in sales and 264.3 billion won in operating profit, it said. Sales were up 6 percent but operating profit fell 22.1 percent from the same quarter last year. The company’s net profit was 193.1 billion won, down 26.4 percent from a year earlier.

A spokesperson for the company said the dip in earnings stemmed from an increase in orders for cheaper vessels since 2009.

The souring bottom lines came as an earnings shock to investors. Market observers said the shipbuilders performed much worse than expected.

Analysts say HHI has entered a low-growth stage after four decades of healthy growth. The fate of its stock price will likely be determined by new orders, they forecast.

“Hyundai Oilbank is expected to post a surplus in the third quarter, but the parent company and its subsidiary Hyundai Samho Heavy industries may well experience further decreases in profitability throughout the rest of the year,” said Yoo Jae-hoon, an analyst at Woori Investment & Securities.

With orders for high-value vessels drying up, the shipbuilding and engine units are likely to face shaved profits for an extended period, Yoo projected.

“There is a slight possibility that the plant and construction-equipment units will recover in terms of profitability, but that will take some time,” Yoo said.

The prospects are slightly brighter for SHI. Halfway through the order, it has met 50 percent of its targeted order value for 2012 of $12.5 billion.

“Growing expectations of new orders for liquefied natural gas (LNG) carriers will help SHI win contracts for 10 more LNG carriers, which it was promised in an earlier contract as an option,” said Park Soo-hyun, a researcher at the securities firm.